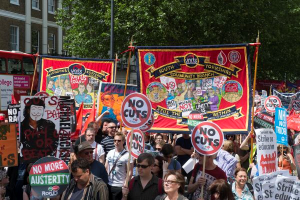 Session at With Banners Held High info here
http://otjc.org.uk/louise-distras-presented-by-banners-held-high/
Joe Rollin Unite Organiser / OTJC Chair Person will introduce this important meeting bringing together four exciting grass roots campaigns. With the mass de – industrialisation of our economy and over 30 years of attacks on Trade Union rights in the UK, the old methods of workplace organisation are inadequate and long out of date, they no longer meet the needs of today’s workers facing short term contracts, agency work and zero hours contracts. Come along and take part in the debate on how we can help fight back. Speakers / Campaigns below …..
Chantal Chegrinec
Pizza Express campaign
http://www.unitetheunion.org/news/unite-hails-fair-tips-victory-in-pizza-express-
campaign/ 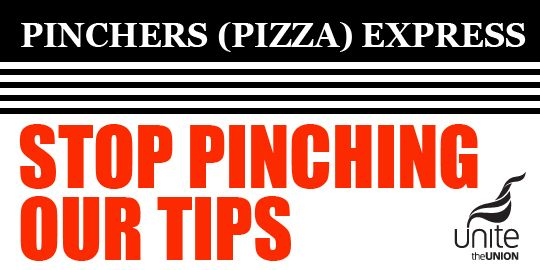 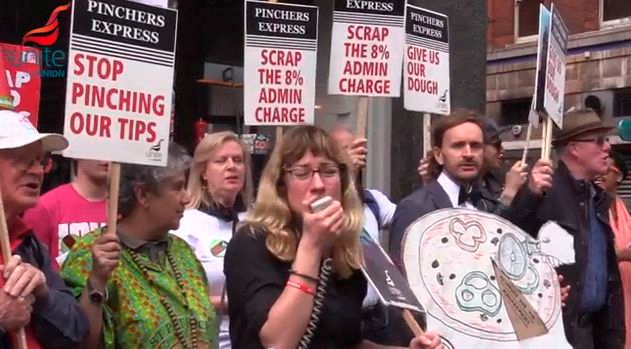 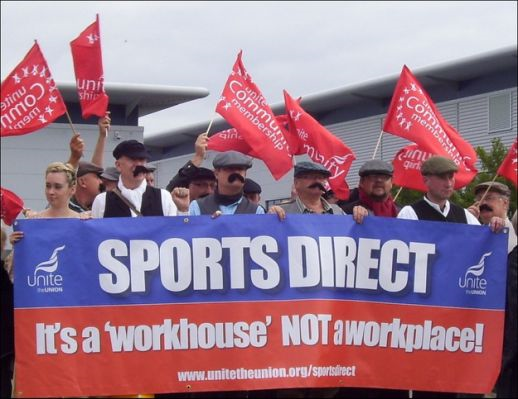 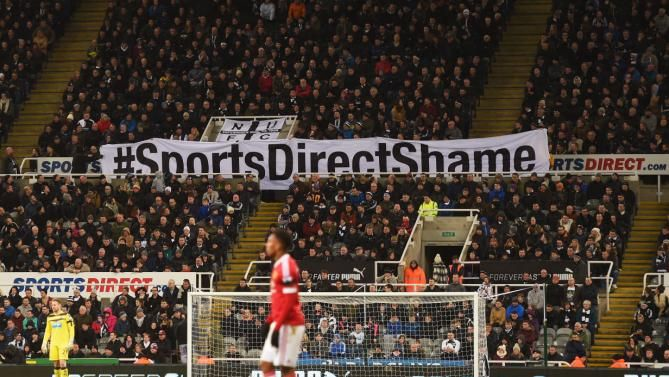 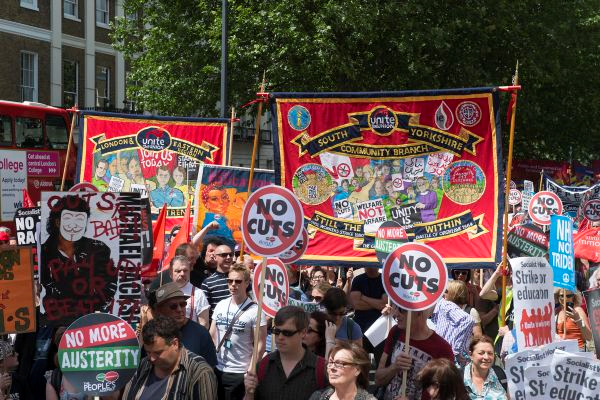 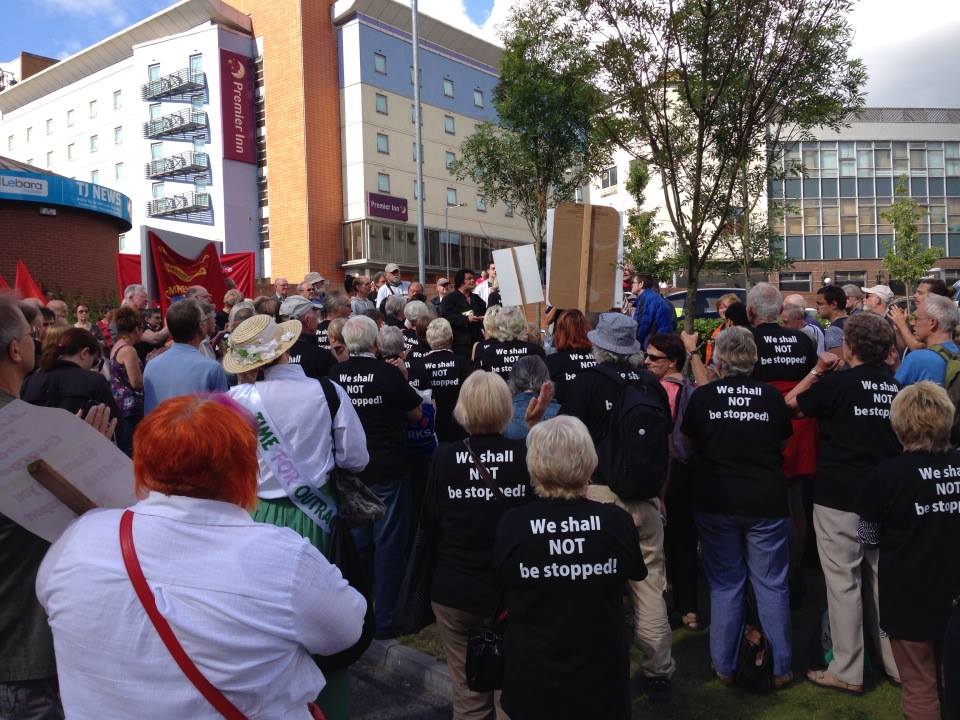 Gareth Lane from the BFAWU 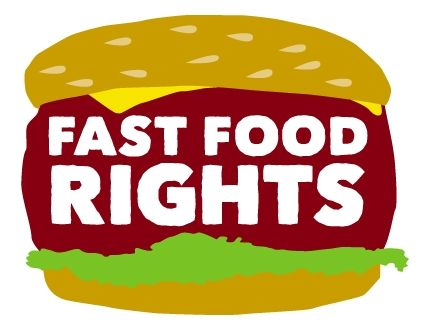 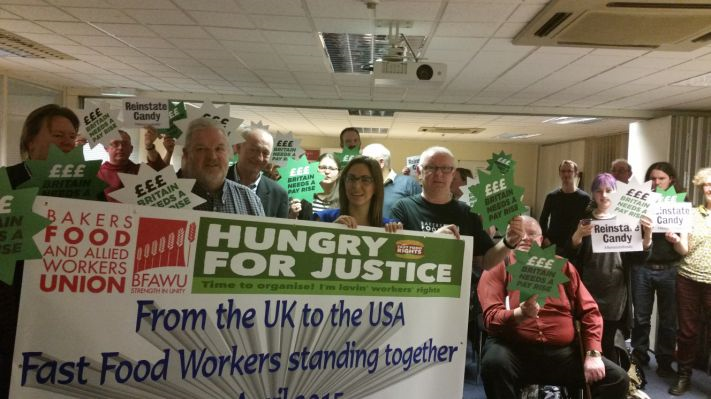 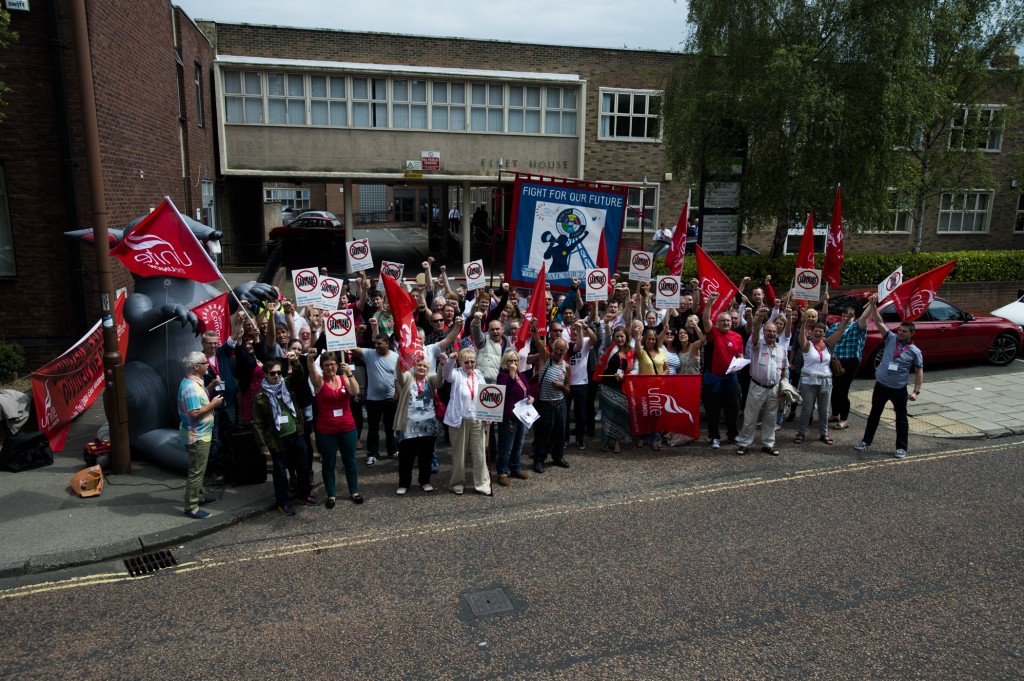 Sanctions are Cruel and unecessary Millons of people are being plunged in abject poverty, unable to heat their homes or even eat. How is this meant to help prepare people for work?

Benefit sanctions must be fought against – say #No2Sanctions

These sanctions are cruel and handed out for ridiculous reasons such as:

This has to stop. 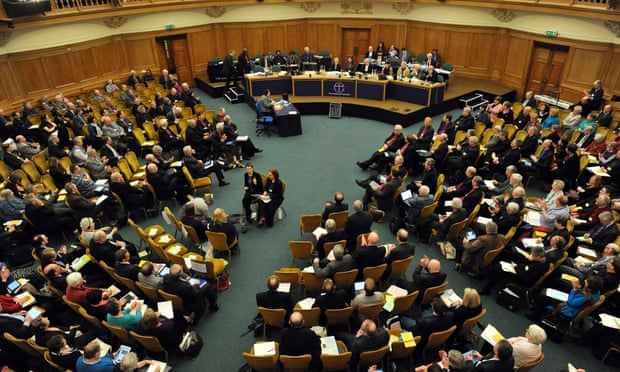 [General] synod called on the government to launch an independent review of the impact of benefits sanctions after hearing anecdotal accounts of hardship and humiliation from bishops, clergy and lay members.

Speakers acknowledged the need for checks on the benefits system to deter abuse, but said the sanctions system was punitive, targeted at the most marginalised and vulnerable, and created a climate of fear and anxiety.

Sanctions made many claimants feel under suspicion, said Malcolm Chamberlain of Sheffield. The “highly punitive regime” resulted in people “begging, borrowing and stealing in order to meet daily needs”.

He cited a case of a claimant being sanctioned for failing to attend a benefits interview because he was at a funeral, and another case of sanctioning when the claimant was being interviewed by police after his house was burgled.

Elliot Swattridge, of the C of E’s youth council, said: “The system is not just broken, but is cruel, even deadly.”

Catherine Pickford of Newcastle, which hosts one of the country’s largest food banks, said for many claimants sanctions felt like “an arbitrary and dehumanising [punishment] for being unemployed”.

According to Simon Taylor of Derby, the impact of sanctions lasted far beyond the period covered by withdrawal of benefits. “Sanctions are not removing dependency but perpetuating and increasing dependency. This is a counter-productive system.”

The former Tory MP Tony Baldry urged the church to embark on a mass lobbying campaign of MPs on the issue of benefits sanctions. “From my 30 years of experience as a member of parliament, the most effective way of engaging with the system is actually to go and see your member of parliament at their constituency surgery.

“They can’t escape … And they’re going to have to do something. And, actually, most members of parliament will treat with great respect a delegation from their local deanery synod or local clergy.”

Such meetings would generate correspondence from MPs to ministers and questions in parliament, he said.

Here is the motion:

The Revd Canon Kathryn Fitzsimons (Leeds) to move on behalf of the Leeds Diocesan Synod:

(a) welcome the extensive work already undertaken by the Church of England in partnership with others to evaluate the impact of benefits sanctioning and to identify and promote recommendations for the reform of sanctions policy and practice;

(b) call on Her Majesty’s Government to implement the recommendations numbered 58-63 inclusive, made in December 2014 by the All Party Parliamentary Inquiry Report into Hunger in the UK Feeding Britain in respect of the use of sanctions upon benefit claimants;

(c) call on Her Majesty’s Government to initiate a full independent review of the impact and efficacy of the sanctions and conditionality regime; and

(d) encourage every part of the Church of England to offer practical and pastoral support to those experiencing benefit sanctions, building on the Church’s work with food banks, credit unions and debt advice.

Three amendments were moved by Nigel Bacon, the Venerable Malcolm Chamberlain, and the Bishop of St Albans, which were carried and are included in italics above.

Synod then voted in favour of the amended motion on a counted vote of the whole Synod.  The voting was as follows:

Get Your Tickets Here 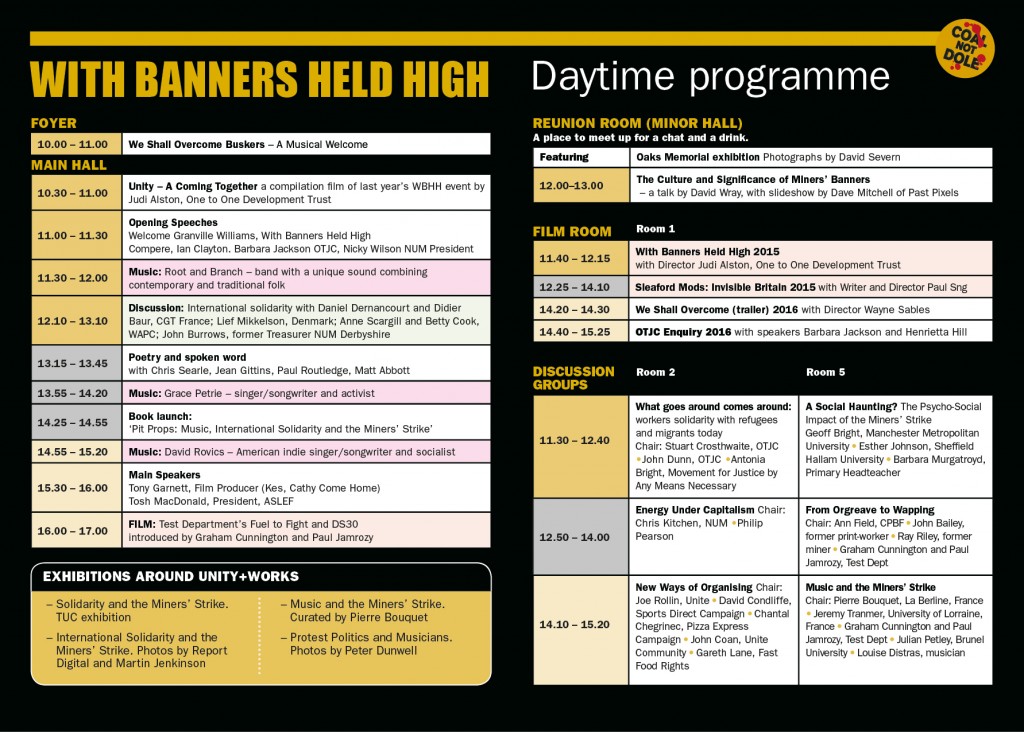 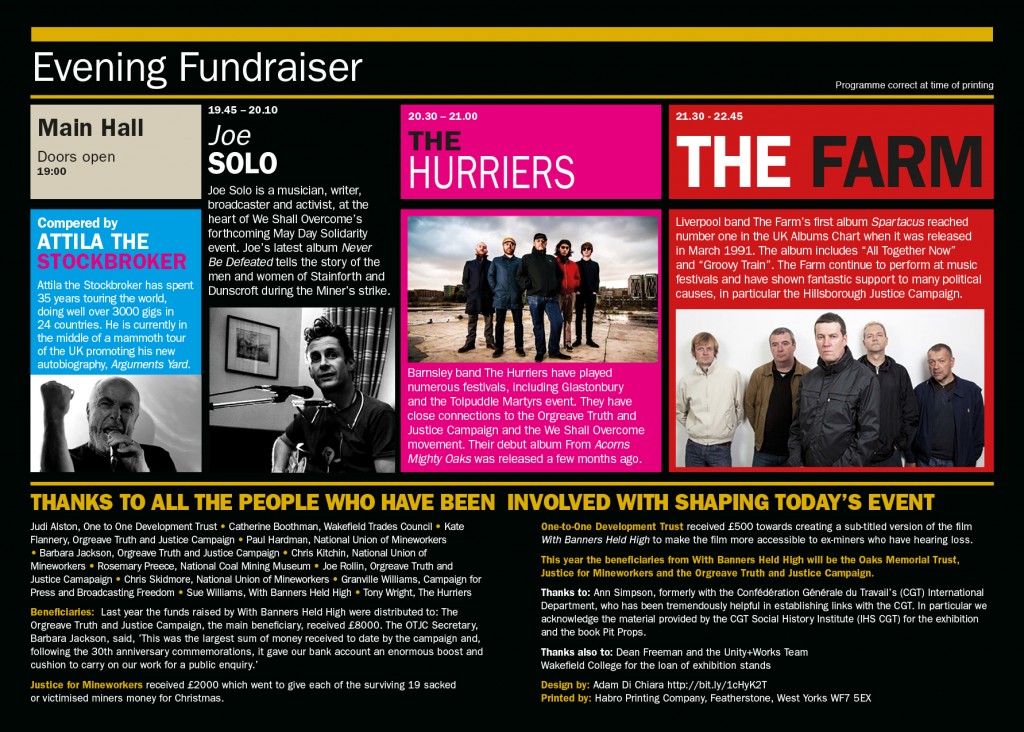 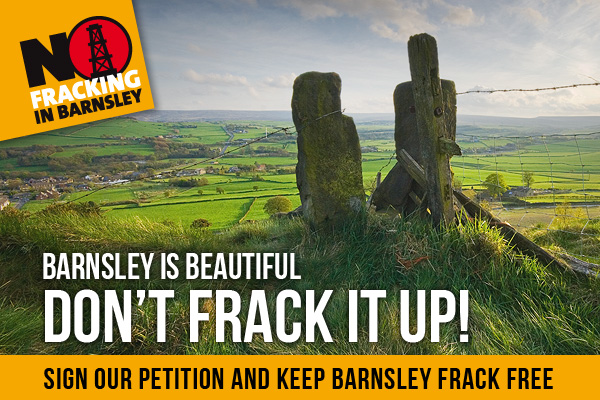 Here is a campaign update from No Fracking in Barnsley. There are numerous ways to get involved from helping to distribute flyers, to attending events, signing the petition and writing to your councillors. The best way to beat fracking is before it starts. Don’t leave it too late, get involved now!

Following the great turn out to leaflet in Barnsley Town Centre a couple of weeks ago, we will be holding another leafleting and petition signing session on Saturday 27th February. It is important that we try to raise as much awareness as we possibly can, as a recent poll showed that the more that people understand about fracking, the more likely they are to be against it.

Rumour has it that there will be a big push on exploratory licence applications in the spring, so that just gives us a few short weeks to get as much information as possible out there. There will be no chance of running out of flyers this time, as we have ordered a print run of 5000. Please come and help.

The flyers are due back from print by mid-week, so if you would like some to distribute around your area, please get in touch.

During the last few days, we have launched a new campaign website at http://www.nofrackingbarnsley.org. Please visit regularly as we will be building the campaign and on-line resources from here. The old wordpress website will no longer be updated, but will operate for a little while, then divert to the new website.

Frack Free Dearne Valley will be showing Ian R Crane’s film, Voices from the Gasfields, followed by a discussion. The film is very thought provoking and should not be missed.

Just three weeks after being launched, our petition to Barnsley Council has passed 2000 signatures (2025 online, 130 paper). If you haven’t already signed, please do so. If you have signed, thank you. Please pass the petition on to your friends and family.

Write to your councillor

The only way that we will stand any chance of keeping fracking out of Barnsley is by people power. Our councillors need to be made aware of the scale of public opposition to fracking, so please write to your councillors and make this clear. We have a letter template that you can use, or amend with your own words and a link to find out who your councillors are if you don’t know.

Add your #FrackOffSelfie to the wall of resistance and tell the frackers where to go!

Add your frack off message to your selfie (no need to be polite) and send it to us via Twitter @NoFrackBarnsley, post in on our Facebook wall NoFrackingBarnsley or email us nofrackingbarnsley@yahoo.com and we’ll add your selfie to our wall of resistance.

Be as creative as you like, get your friends, family, pets and soft toys involved and help spread the word that fracking isn’t wanted in Barnsley or anywhere.

More and more people are facing benefit sanctions. Half a million people have had their benefits suddenly stopped by sanctions in the last 12 months. There’s a big task ahead of us to stop this cruel and unecessary practice, but one of the best and easiest things you can do is lobby your MP.This guide is created to make that process as easy as possible.

Job 7297 Speak out against Sanctions

It was great that the Barnsley Chronicle ran an article on our Footy Tournament, not so great they failed to report who organised it! ever vigilant our ESOL team (namely Brian Clark) picked up on this and got this exellent letter published this week to set the record straight.

I would like to add to the article in the 29th January edition concerning  Jabber (Jimmy) Mohammed and the 5 a side football tournament which took place on 16thJanuary.  This event was unique because it was organised by two passionate football fans, Linda Hughes (Unite Union Learning Organiser) and Joe Rollin (Unite Industrial Organising Officer) as an anti-racist event and to show support for refugees and asylum seekers.  It was decided to organise using the title “Celebrating diversity through learning” and supported by Barnsley FC Community Trust, Learn with Unite, Achievement through sport, Professional Footballers Association, Union Learning Fund, Show Racism the Red Card and Barnsley Trades Union Council.    Following negotiations with Barnsley Football Club the tournament was held in their Training Academy and 16 teams were invited to take place.  The teams from Barnsley, Doncaster, Leeds, Leicester, Manchester, London, Middlesbrough, and Sheffield were not all refugees or asylum seekers, but all anti racist.

The Barnsley team were people attending ESOL (English for speakers of other languages) lessons organised by Unite the Union held at Quaker House in conjunction with The British Red Cross.

At half time Kenny Barron Unite the Union’s Head of Lifelong Learning presented ESOL certificates and medals to the Barnsley ESOL Team and a free buffet was provided by the Professional Footballers Association. 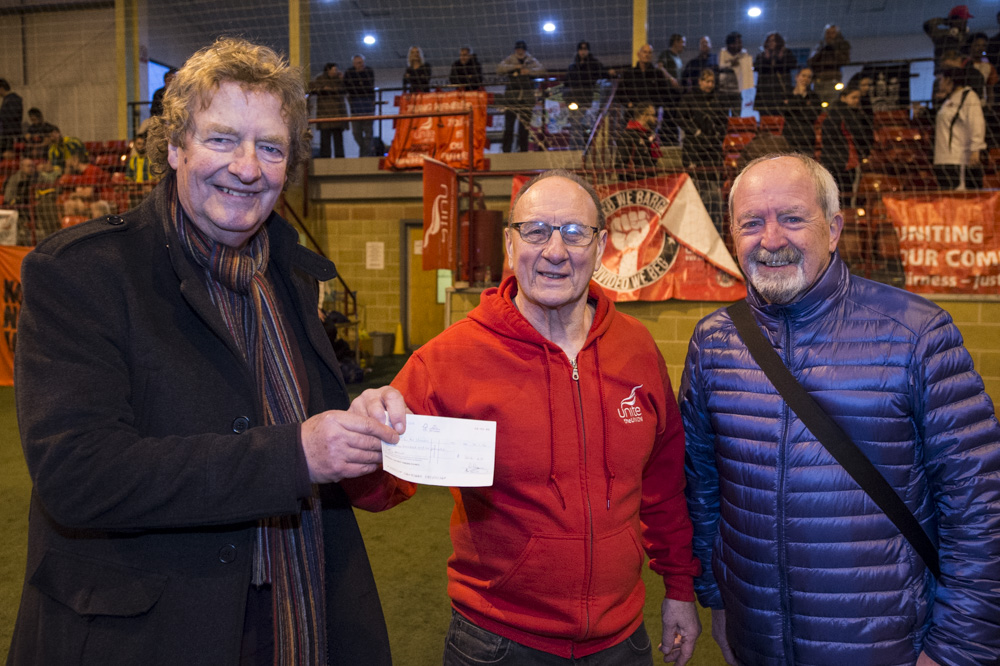 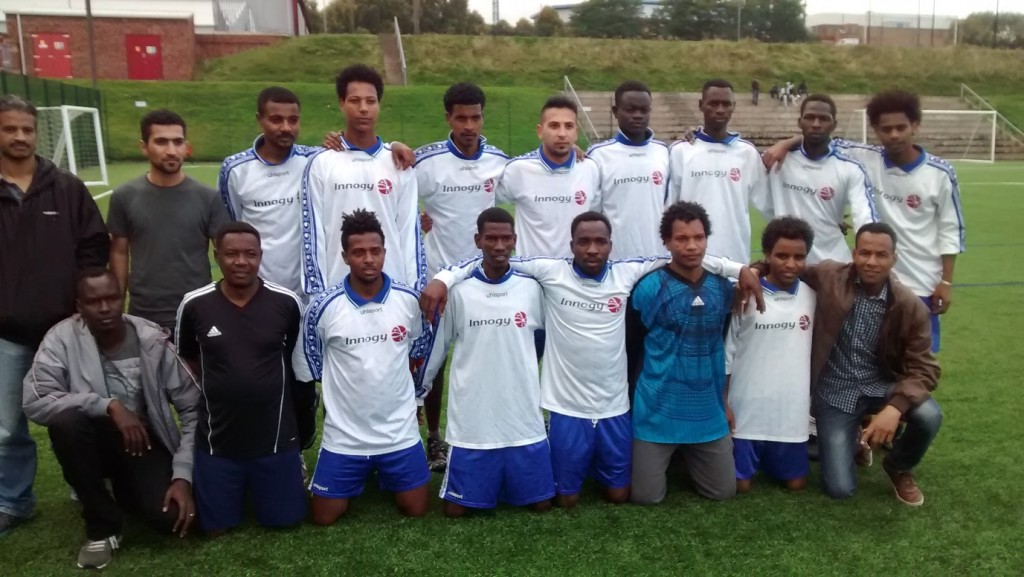 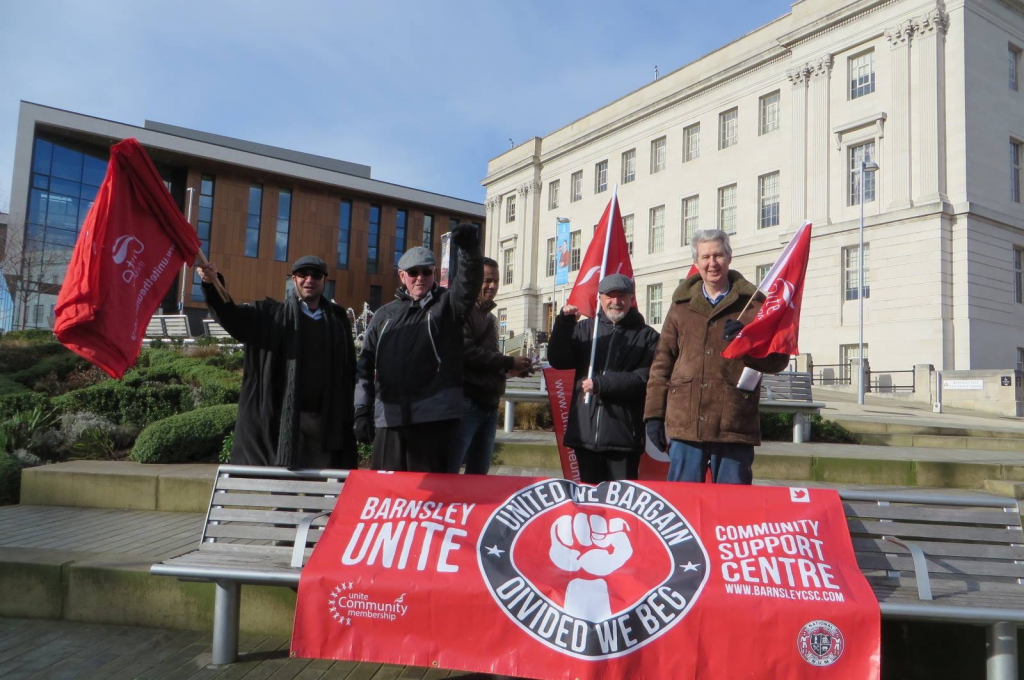 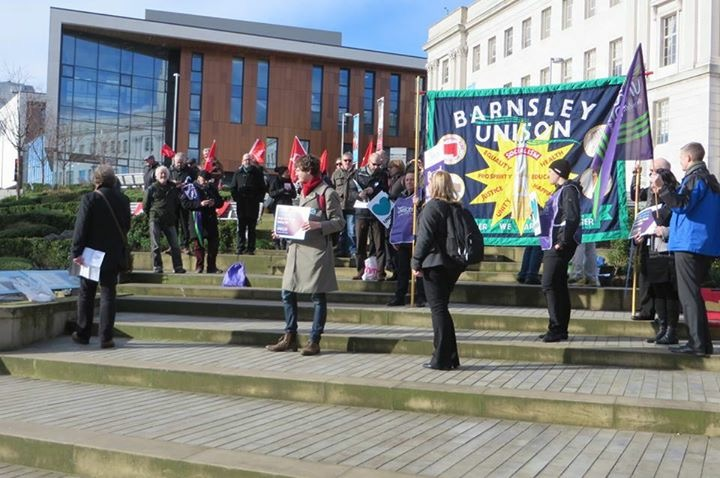 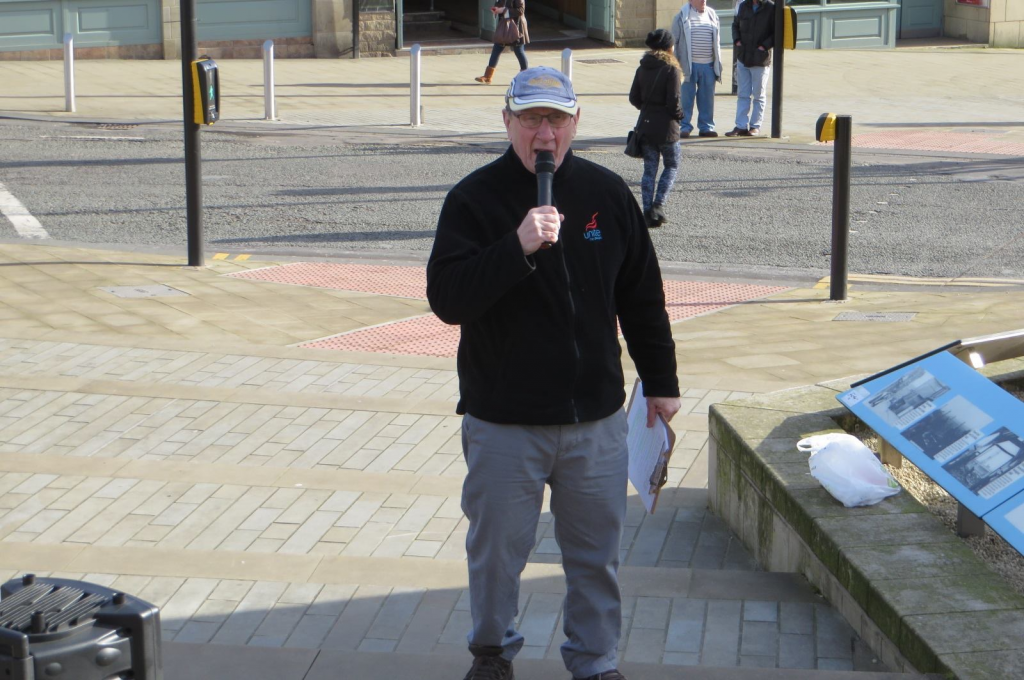 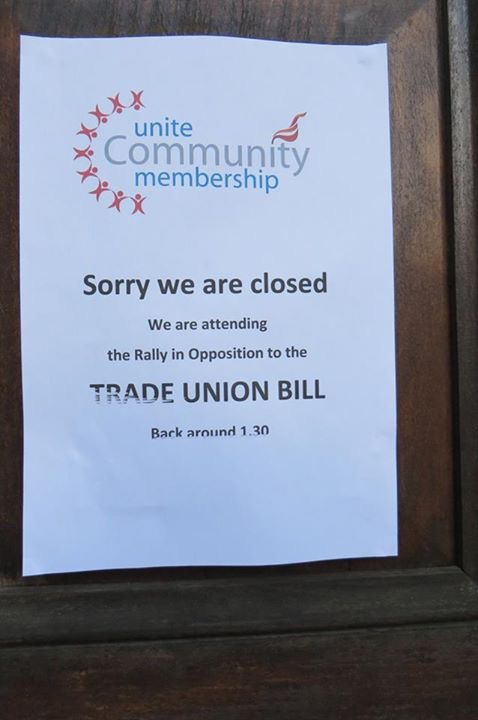 Now is a really important time to stand up against Islamophobia and in defence of refugees.  I’m proud we had a good public meeting and rally in Barnsley in December to say “Refugees are Welcome Here” when the South Yorks Casuals marched in our town. We need to keep up our public presence to drown out the voices of hatred which try to divide our community.

Unite Against Fascism is supporting the national demonstration against racism and fascism which is taking place in London on Sat March 19th. We have a bus booked from Barnsley – more details to follow, but if you want a seat on the bus please let me know.

There will be an open organising meeting at the YMCA Blucher St Barnsley on Tues 23rd Feb at 6.30. We will be discussing local activities including holding a public meeting in advance of the national demonstration. All are welcome to come along and help build the anti-racist movement in Barnsley.

Hoping to see you on 23rd.  If you cant get there but can use leaflets etc to advertise local events, please let us know.

There are still 8 places left on the free mini bus leaving the Showroom Cinema, Paternoster Row, S1 at 9am on this date. We aim to get to our destination for 1pm and should return to Sheffield by about 8pm.  If you want to be part of this day please email Barbara at ogreavejustice@hotmail.com to reserve a place. Places will be on a first come basis and your commitment to be there must be a firm one.