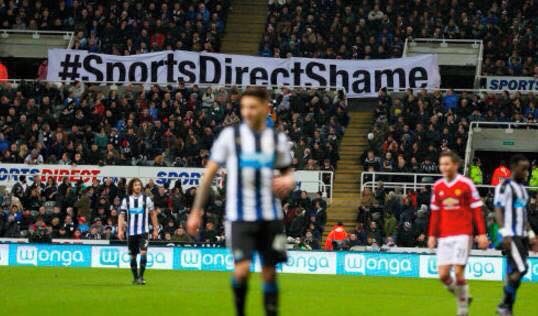 A review by Mike Ashley into the use agency workers at Sports Direct will be nothing more than a public relations stunt if it fails to end ‘Victorian’ work practices at the retailer’s Shirebrook warehouse, Britain’s largest union Unite warned today (Friday 18 December).

The review announced by the Sports Direct board today, follows a Guardian investigation which found that extra, unpaid time taken for “rigorous” compulsory searches meant workers were paid less than the minimum wage.

Likening working conditions in the warehouse to a ‘gulag’, the investigation also found that workers were being ‘docked’ wages for arriving as little as a minute late to work.

Unite regional officer Luke Primarolo said: “Shameful ‘Victorian’ work practices have no place in modern Britain and this review should not deter HMRC from investigating the non-payment of the minimum wage to agency workers at Sports Direct.

“Unite has repeatedly raised concerns with the board and Mike Ashley directly about the use of ‘Victorian’ work practices. We look forward to participating fully with Mike Ashley’s review and to working with Sports Direct to eradicate the mistreatment of workers at its Shirebrook warehouse.

“If his review is to be taken seriously then it has to have concrete outcomes, such as restoring dignity at work by moving agency staff at Best Connection and Transline workers onto permanent contracts.

“A failure to do so will do nothing to restore investor and customer confidence and leave the board open to accusations of doing nothing more than engaging in a public relations stunt.”

This article by Julian Kollewe originally appeared in the Guardian.

Sports Direct is to launch a review of all agency staff terms and conditions, which it said would be overseen personally by its founder Mike Ashley.

The move follows a Guardian investigation, which revealed how temporary warehouse workers at Britain’s biggest sportswear chain are subjected to an extraordinary regime of searches and surveillance. Undercover reporters also came up with evidence that thousands of workers were receiving effective hourly rates of pay below the minimum wage.

The company said on Friday: “Sports Direct always seeks to improve and do things better, listens to criticism and acts where appropriate. With that in mind, as noted above, the board has agreed that Mike Ashley shall personally oversee a review of all agency worker terms and conditions to ensure the company does not just meet its legal obligations, but also provides a good environment for the entire workforce. We expect him to start that work in the New Year.”

Labour’s former shadow business secretary Chuka Umunna said: “This Sports Direct review is overdue but has the whiff of a pupil marking its own homework. Sports Direct should get an independent third party to do their review into workers rights – the company has a lot to learn.”

At the same time, Sports Direct mounted a robust defence of its employment practices, issuing a long list of rebuttals.

It said the warehouse tannoy is not used to ‘harangue’ or ‘name and shame’ staff, but is used for logistical reasons, for example, to redeploy staff to other areas of the building.

It said it does not penalise staff for being ill. “Sanctions may be applied if workers fail to follow the company’s reasonable sickness absence notification procedures, which are in line with industry best practice. The company is not aware of any occasions on which sick children have not been able to be collected from school by their parents. Sports Direct allows staff time off to look after dependants in such circumstances.”

Local primary school headteachers had told the Guardian that workers at Sports Direct’s Shirebrook warehouse in Derbyshire are sending their children to school while sick because they are too afraid to take time off work.

The company defended the security measures at its warehouse in Shirebrook in light of the risk of theft. Sports Direct said banning staff from wearing the brands stocked in the warehouse was “not an unusual practice,” adding: “There are of course numerous other brands that staff can easily wear.”

The Guardian revealed that staff are banned from wearing 802 clothing brands at work, and that they have to go through rigorous searches, and are not paid for their time while being searched.

The company said all employees, agency workers and visitors, including executive management and board members, are subject to “random searches”.

Sports Direct also defended its use of zero hour contracts for casual staff in its shops, saying it is not alone in using them. It added that a “significant number” of casual workers had moved from zero hour terms into permanent contracts “when the circumstances allow”. Many have developed successful careers within the company, including the chief executive, it said.

It also said that virtually all casual retail staff are eligible for bonus payments and that more than 80% achieved a performance-related bonus in November.

The retailer came under fire from MPs during an urgent parliamentary debate on Monday and a government minister, Nick Boles, said the company would face sanctions if it flouted wage laws. HM Revenue & Customs is facing increasing pressure to launch an inquiry into the sportswear retailer.

With protests from Truro to Newcastle and a demo outside the AGM at Sports Direct HQ, the day received wide spread coverage in national and regional media.

The campaign continues … But in the meantime here’s a small selection of some of the media coverage.

The Guardian – Editorial on Sports Direct: Big British capitalism at its grubbiest

City AM – Watch out Mike Ashley

P.S. if you haven’t signed the petition click here now

Alex Flynn
Head of media and campaigns
Unite the Union

Tomorrow Unite members will be protesting outside Sports Direct Annual General Meeting demanding an end to ‘Victorian’ work practices at the retailer’s Shirebrook warehouse and pays a real living wage.

The protest is part of a national day of action outside over 25 Sports Direct stores across the UK. It comes amid a shareholder revolt over the company’s governance and employment practices resulting in calls for the Sports Direct chairman Keith Hellawell to stand down at tomorrow’s AGM.Unite has launched an online petition calling for an end to ‘Draconian’ working practices and an end to Sports Direct’s reliance on zero hours contracts.

The hash tag is #SportsDirectShame – here is the link to the petition.
List of actions here.
Report here.
More here. 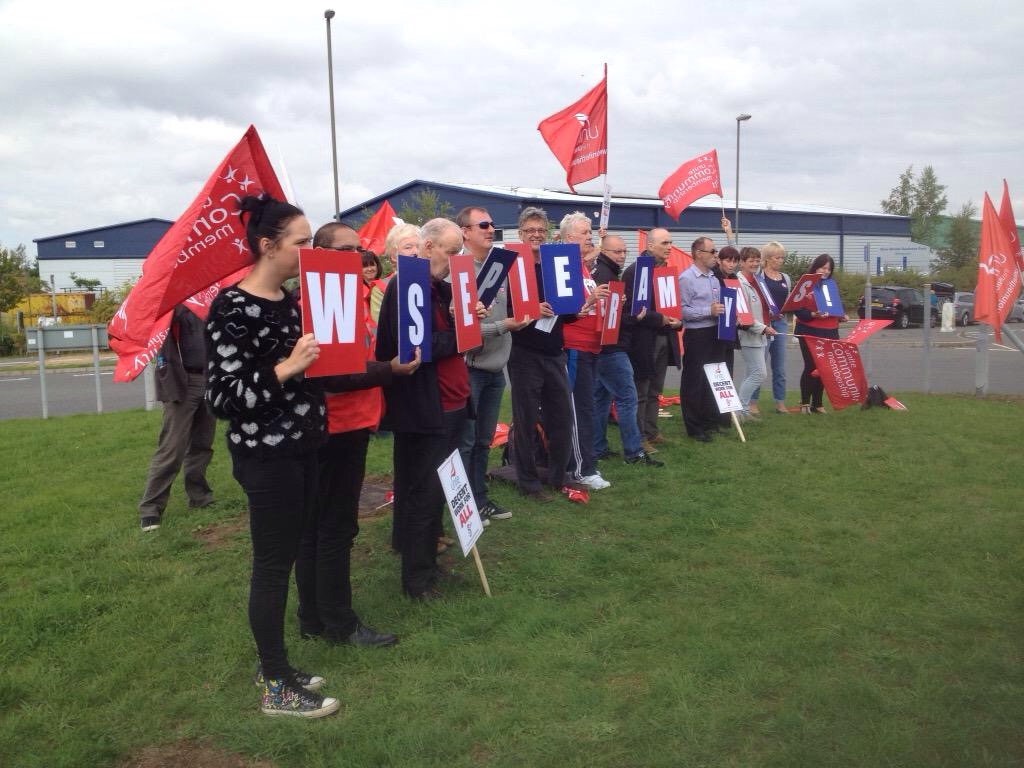 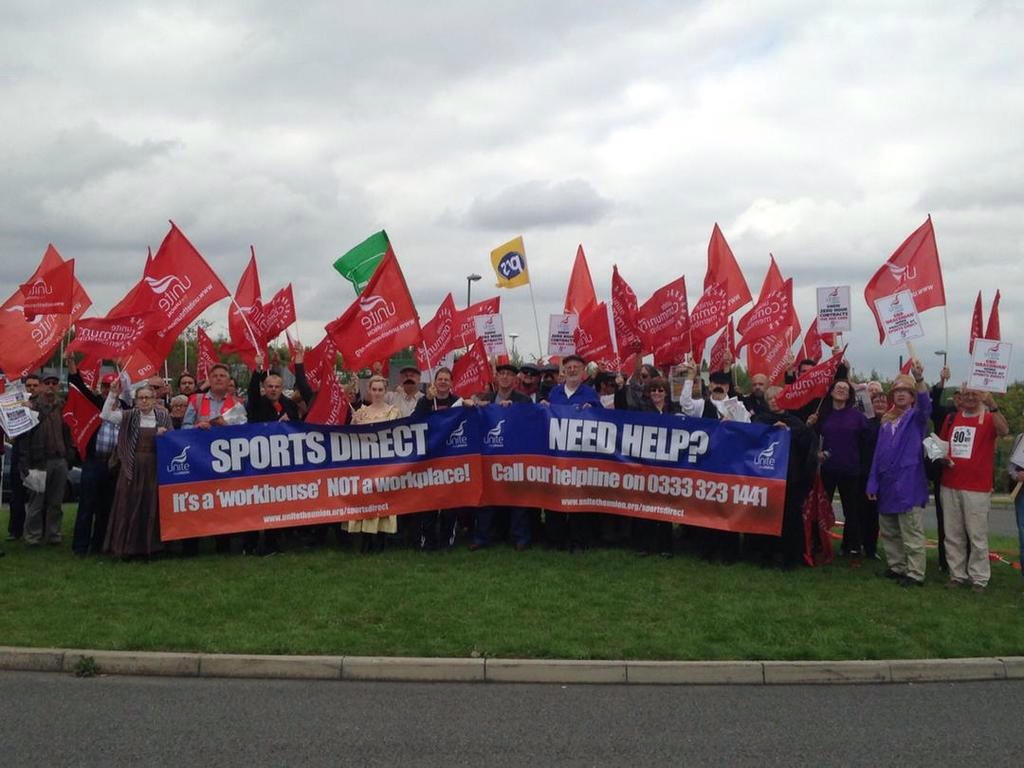 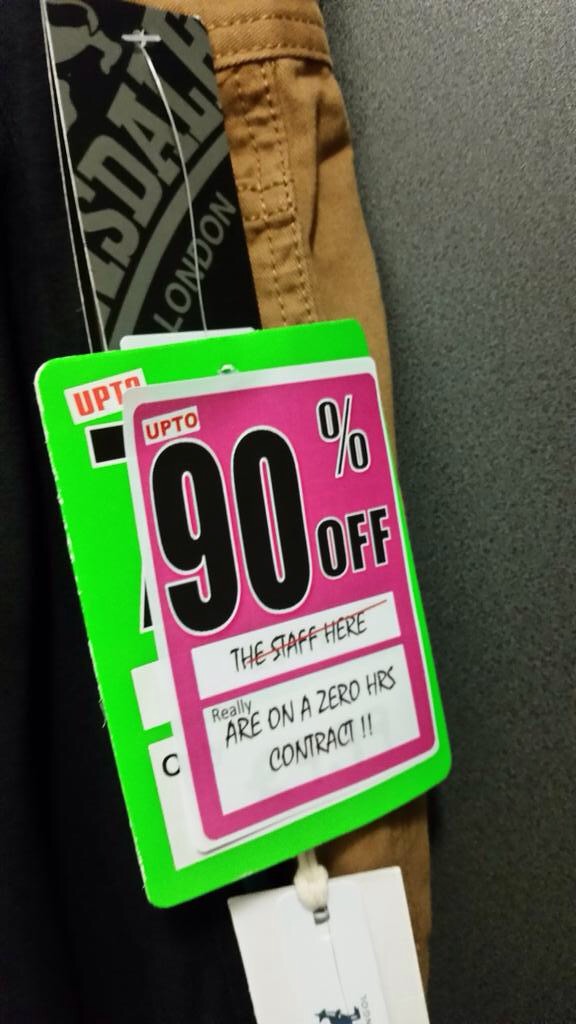 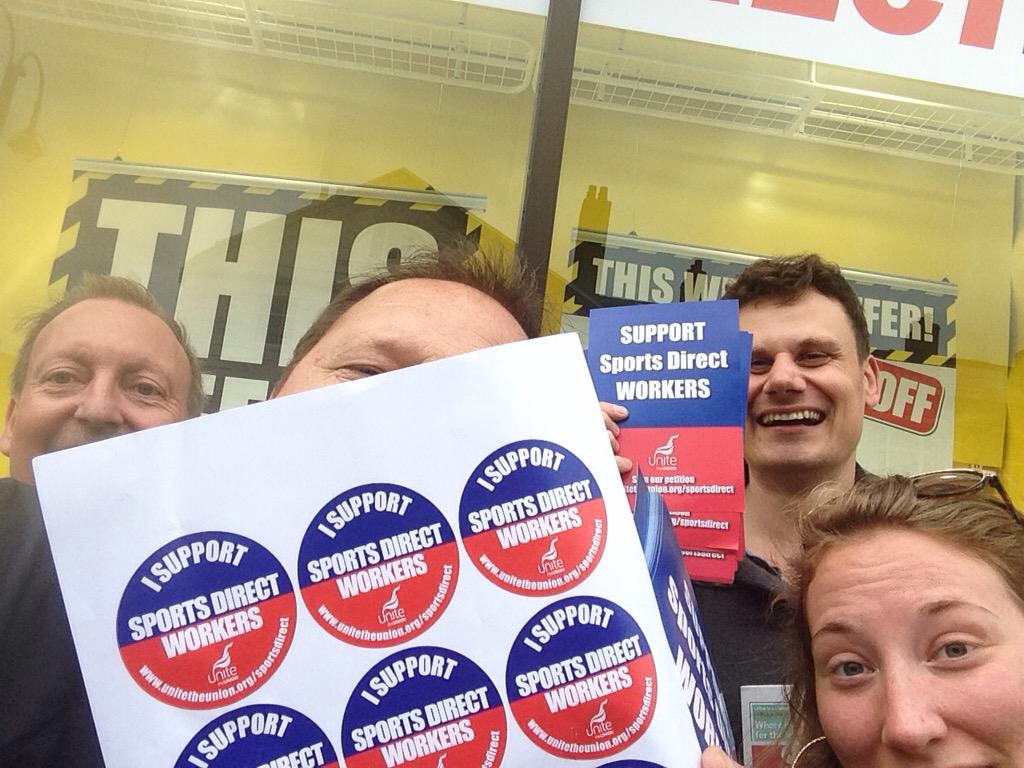 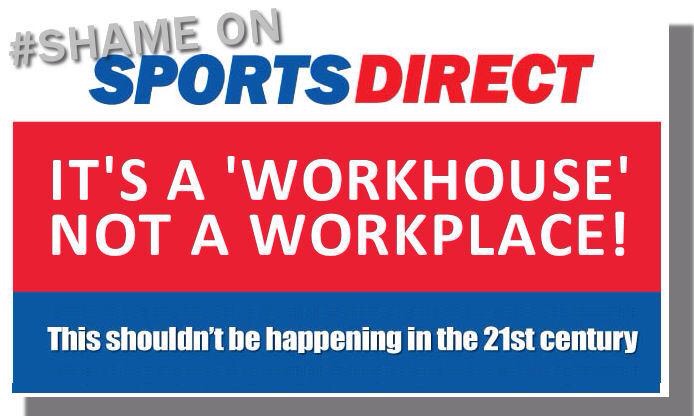 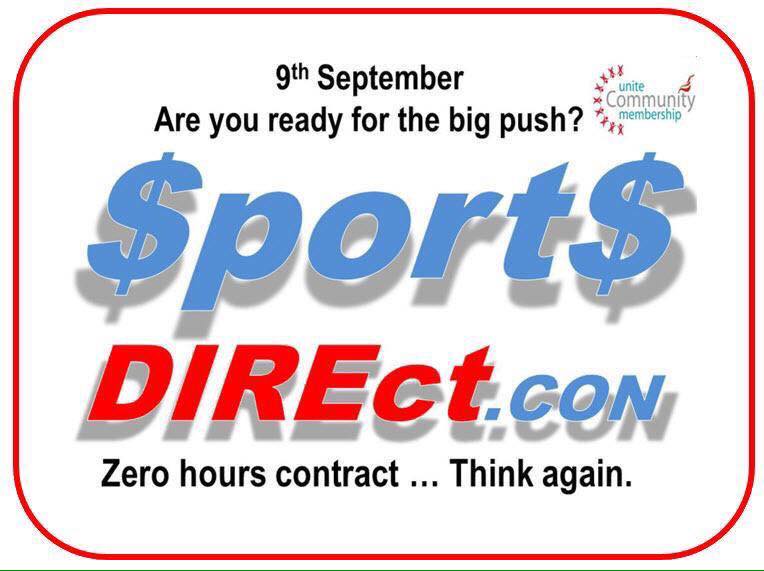 Get Involved! Email Your Unite Community Coordinator for more info!

Direct Action Gets The Goods! See our Win against Pizza Express here:

Sticker Campaign against the Rip off Sports Direct! 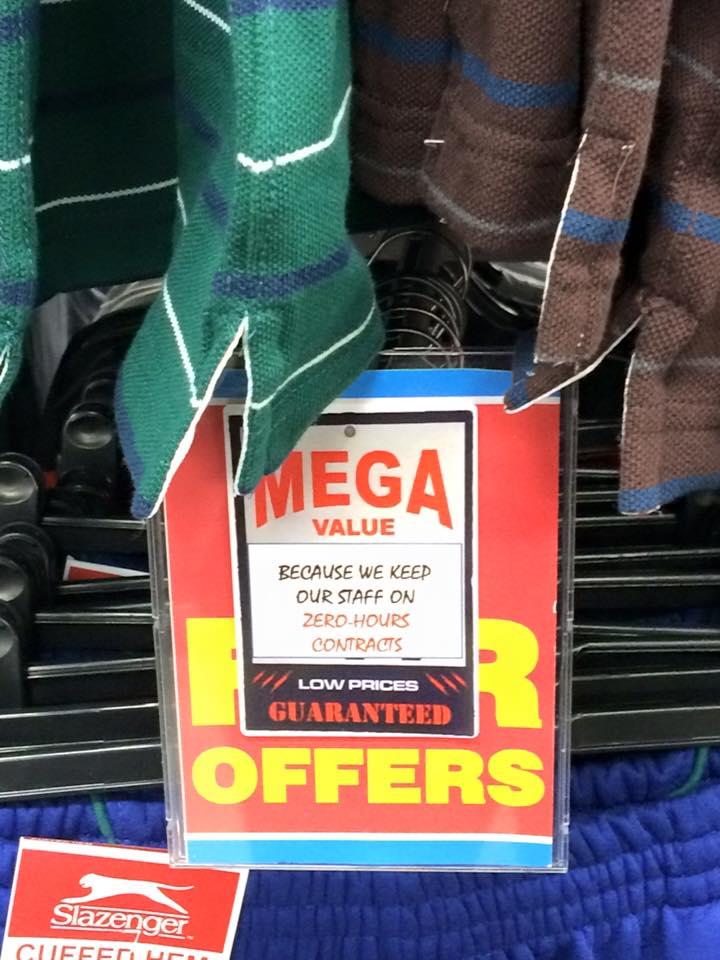 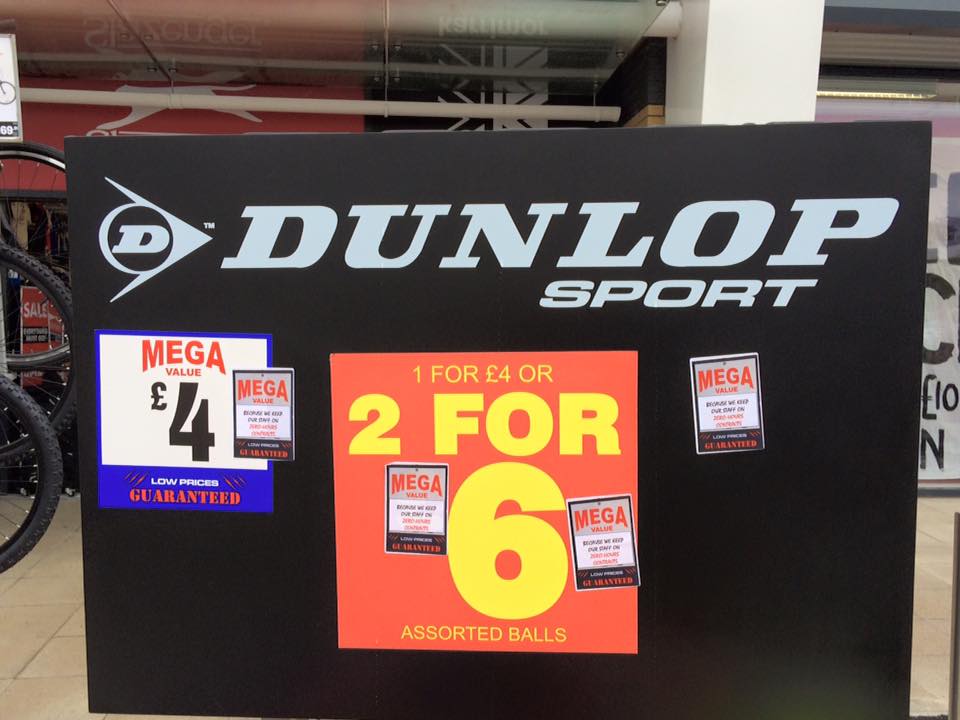 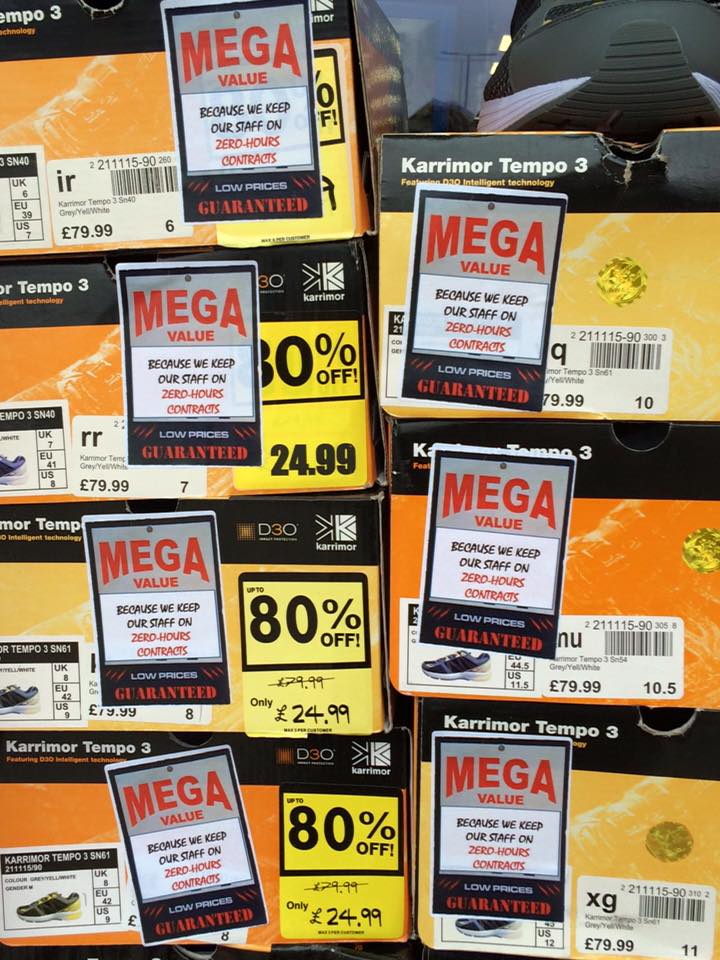 Britain’s largest union, Unite urged the highly profitable Sports Direct to clampdown on ‘Victorian’ work practices today (Friday 7 August), as it submitted a pay claim on behalf of workers at its Shirebrook headquarters and warehouse in Derbyshire.

The union, which represents permanent warehouse workers on the site, is calling on Sports Direct to move zero hours agency workers onto permanent contracts and pay the real living wage of £7.85 per hour.

Unite estimates that only 300 out of the 3,000 plus workers at the Shirebrook depot actually have permanent contracts with Sports Direct with the majority on zero hour contracts with two employment agencies – Best Connection and Transline.

Working conditions in depot are underpinned by a ‘six strikes and you’re out’ disciplinary procedure which have been described as ‘draconian’ and likened to a ‘workhouse’ by the union. Under the procedure agency workers can get ‘strikes’ for taking too long in the toilet, talking too much or even having time off for sickness.

With latest figures for the Sports Direct showing a 7.4 per cent increase in gross profit to £1.155 billion, the union warned the retailer that it couldn’t plead poverty and needed to start weaning itself of its addiction to low paid zero hours work.

Over 70 per cent of the workers in stores across the UK are on a low paid zero hours contract, according to latest estimates.

Commenting Unite regional officer Luke Primarolo said: “Agency workers on zero hour contracts are being subjected to working conditions at Sports Direct that are more akin to a workhouse than a FTSE 100 company.

“These Victorian era work practices where workers eke out minimum wage living in constant fear of losing their job have no place in 21st Britain.

“Mike Ashley’s Sports Direct is generating massive profits and can well afford to wean itself off a business model built on low pay and exploitative zero hours contracts.

“It’s time for Sports Direct to restore dignity and security at work by paying the real living wage and putting staff on permanent contracts.”