Escape the daily grind and develop your mind.
Apply to Ruskin College today.

The mission of the college has always been to provide educational opportunities to adults who are excluded and disadvantaged, and to transform the individuals concerned along with the communities, groups and societies from which they come, the only change having been to personalise …the language (away from ‘the excluded’, who do not sound like people) in line with growing equalities awareness. The mission statement is twofold:
The first aim, that of giving individuals a second chance in education, continues to be achieved by admitting those with few or no formal qualifications to courses of study that can result in, or lead on to, university-level qualifications.

The second aim, the transformational element of the mission, is evidenced by the fact that the most frequent thing former students say about Ruskin is that it changed their lives. Students, whether or not they themselves are resident, benefit from studying in a setting with a strong sense of academic community and from the intensive tutorial teaching that Ruskin offers. The college is also transformational because it sees education as a vehicle for progressive social change.

Ruskin tends towards a curriculum that has high social relevance, students who want to make a difference in the world, and forms of academic scholarship and research that are engaged and applied.

Ruskin’s mission is also pursued by means of strong historical links, nationally and internationally, with the labour and trade union movement, other social movements and activism around social issues (e.g., anti-ageism), as well as with local communities, for example through the Social Work and Youth and Community Work programmes. 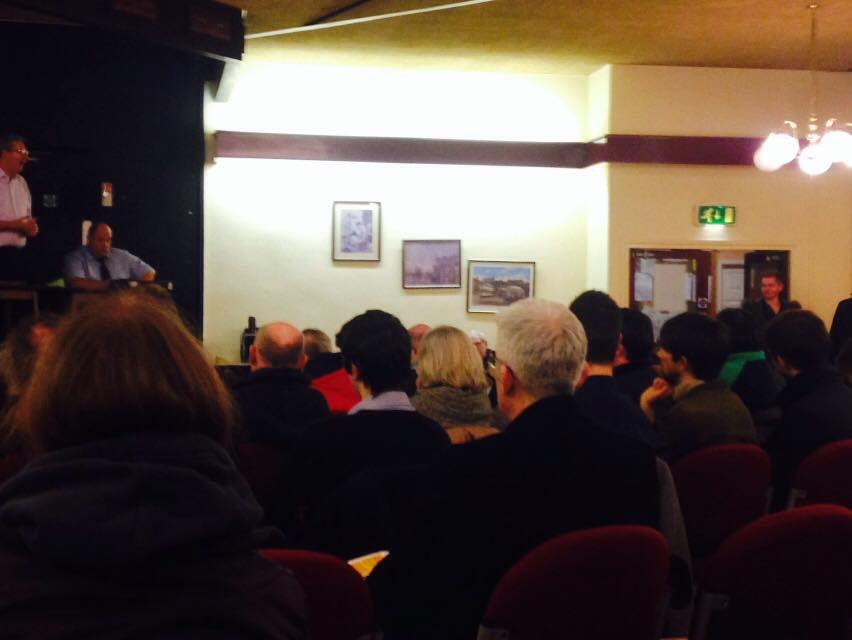 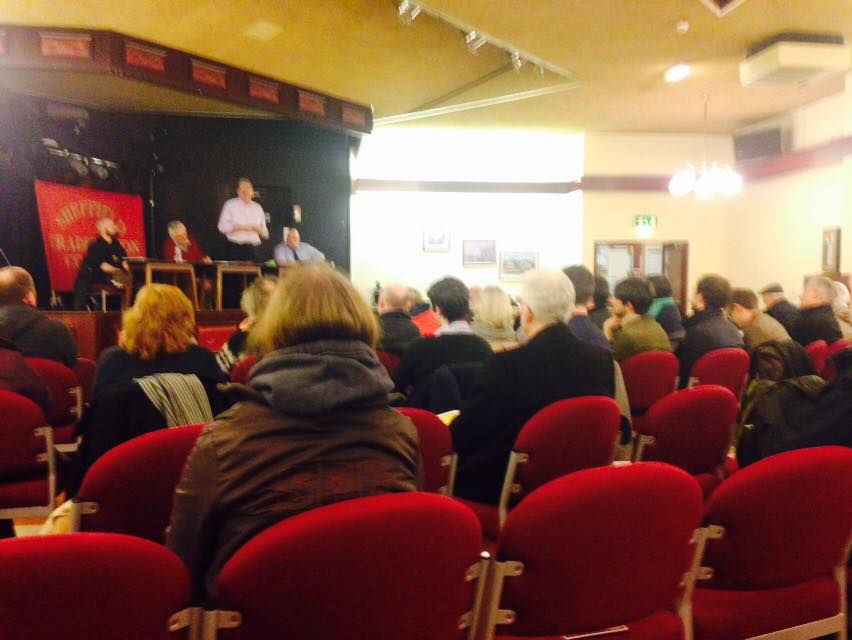 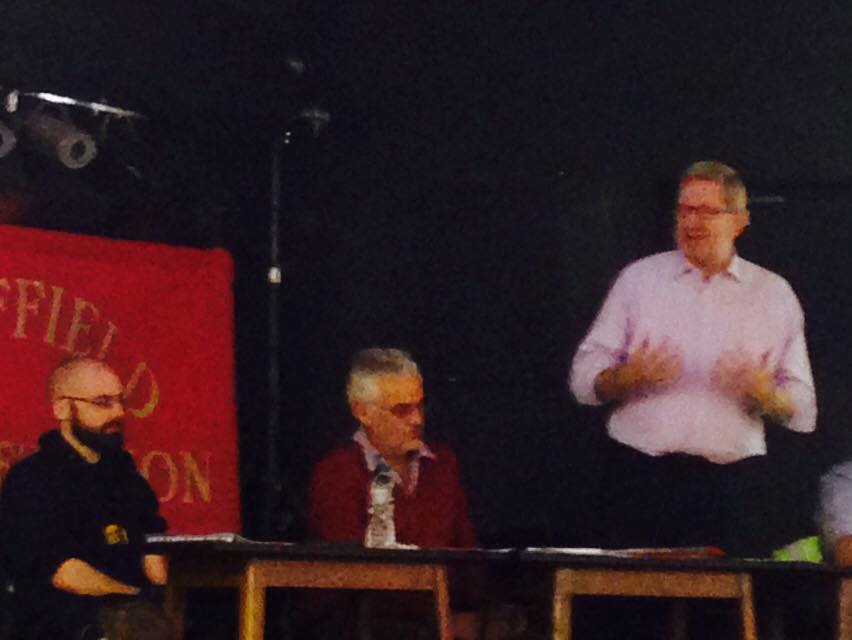 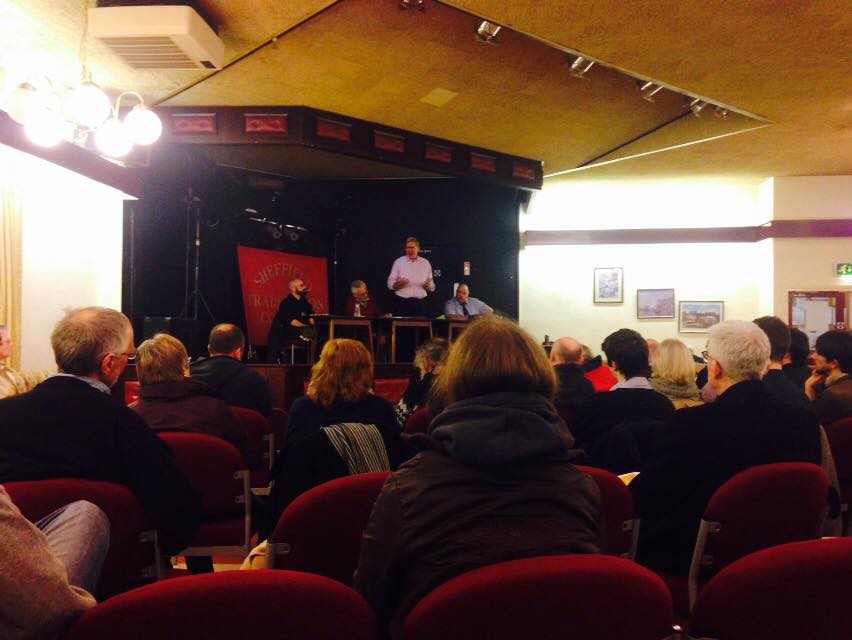 Len McCluskey was in South Yorkshire again last night this time addressing a meeting organised by the Sheffield Trades Council. Another fantastic speech and debate about the future of the Trade Union movement, the fight against Austerity and of course the up coming general election. Barbara Jackson Unite Community member and OTJC Secretary got to ask a great question about The Orgreave Campaign and the continued struggle for Justice. Watch this space for more information on upcoming action.

Worried that working class history is being erased and that all we are left with is ghosts?  Well who ya gonna call? Call Ghost-Lab Barnsley! 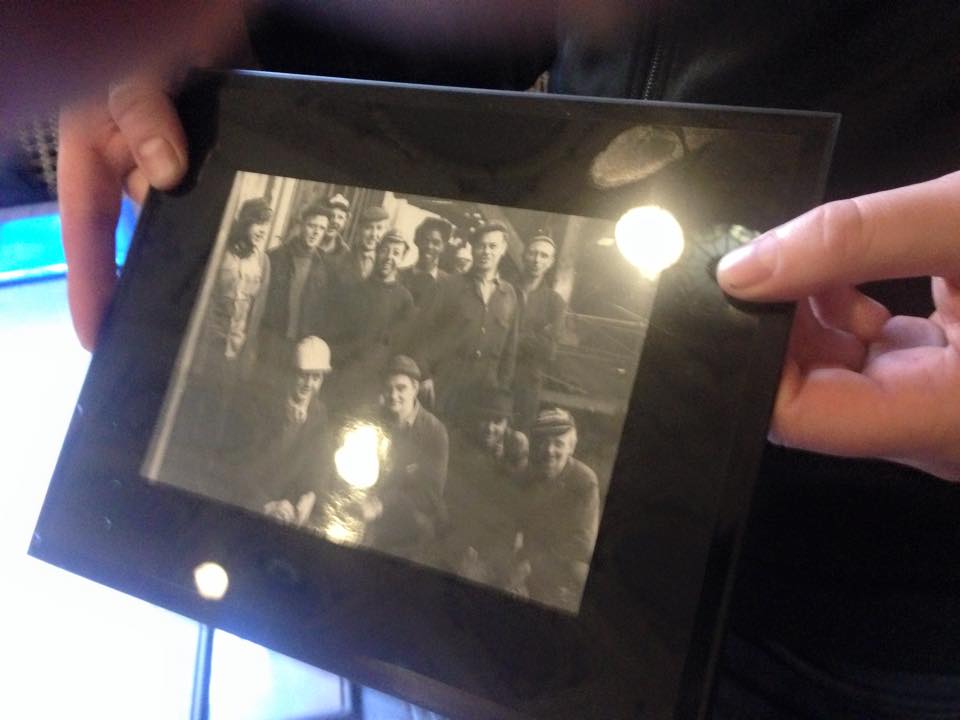 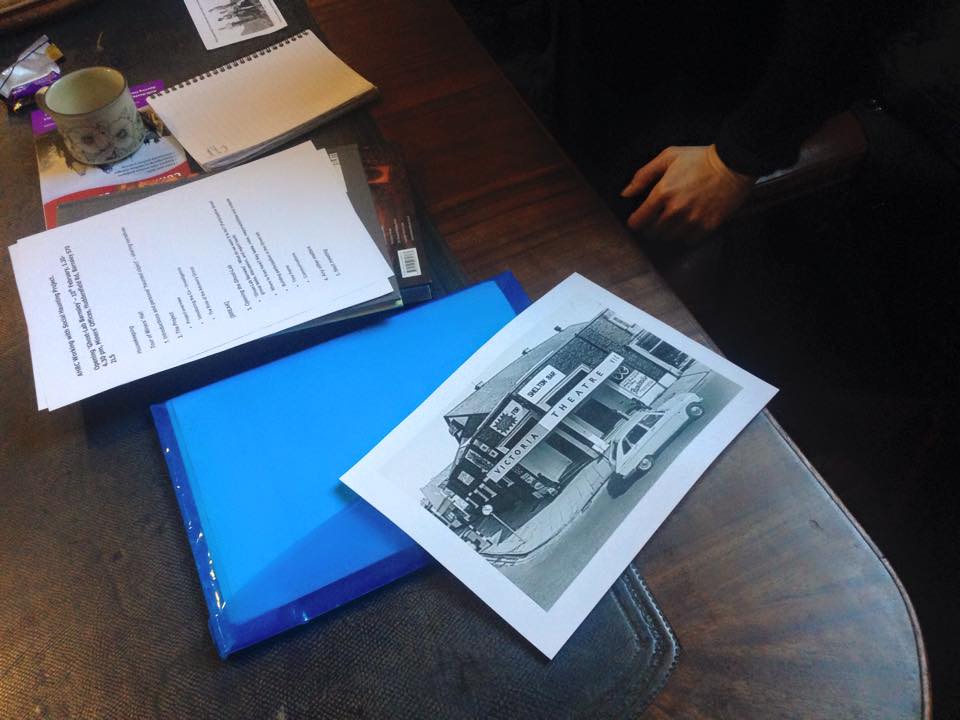 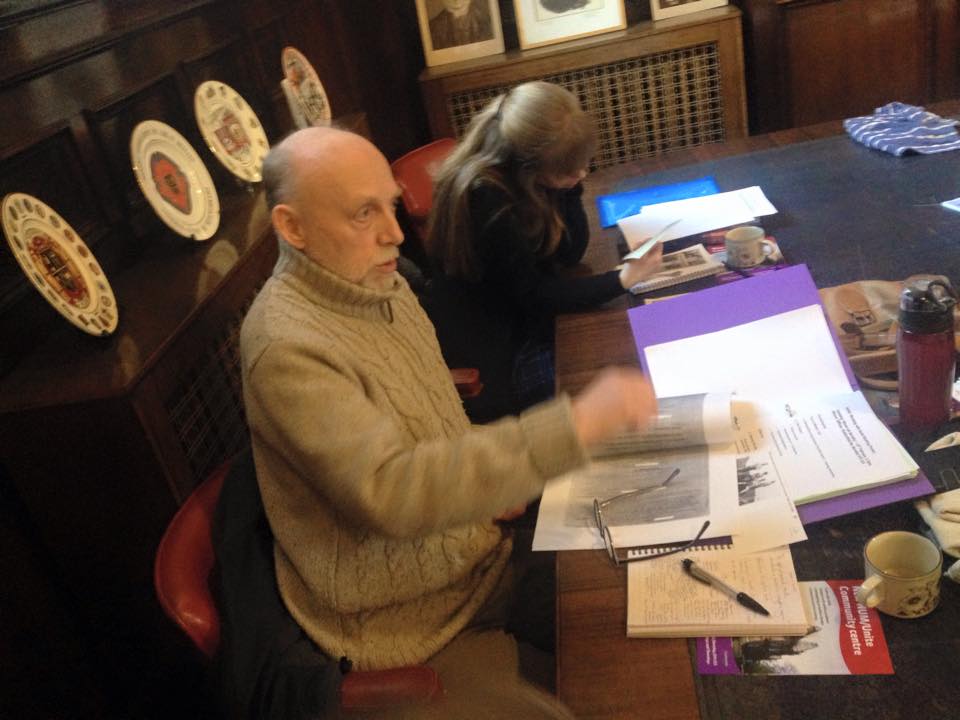 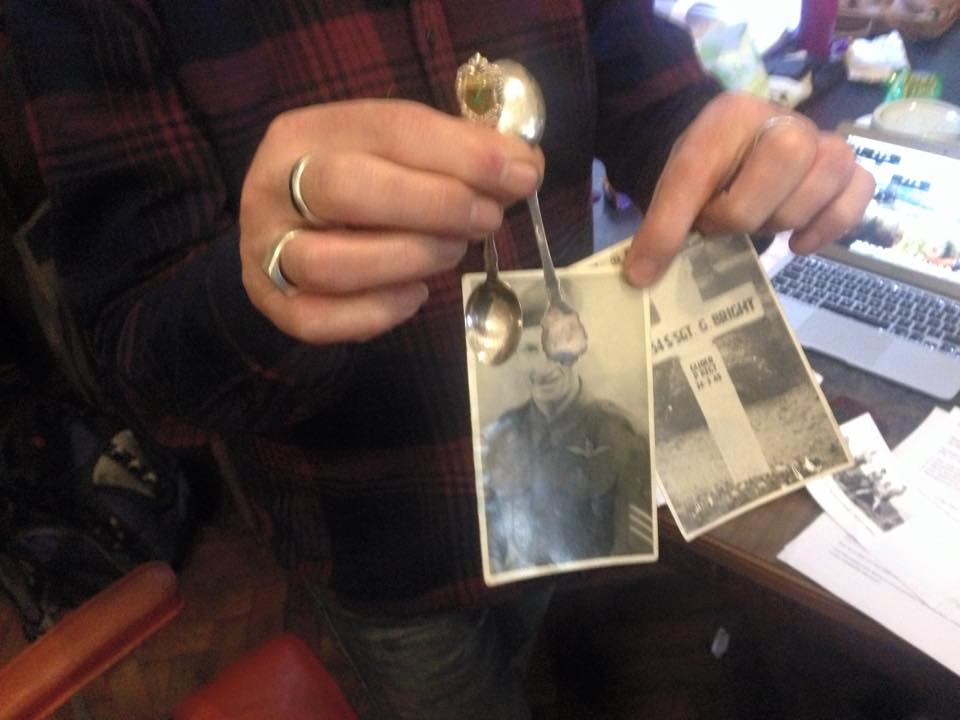 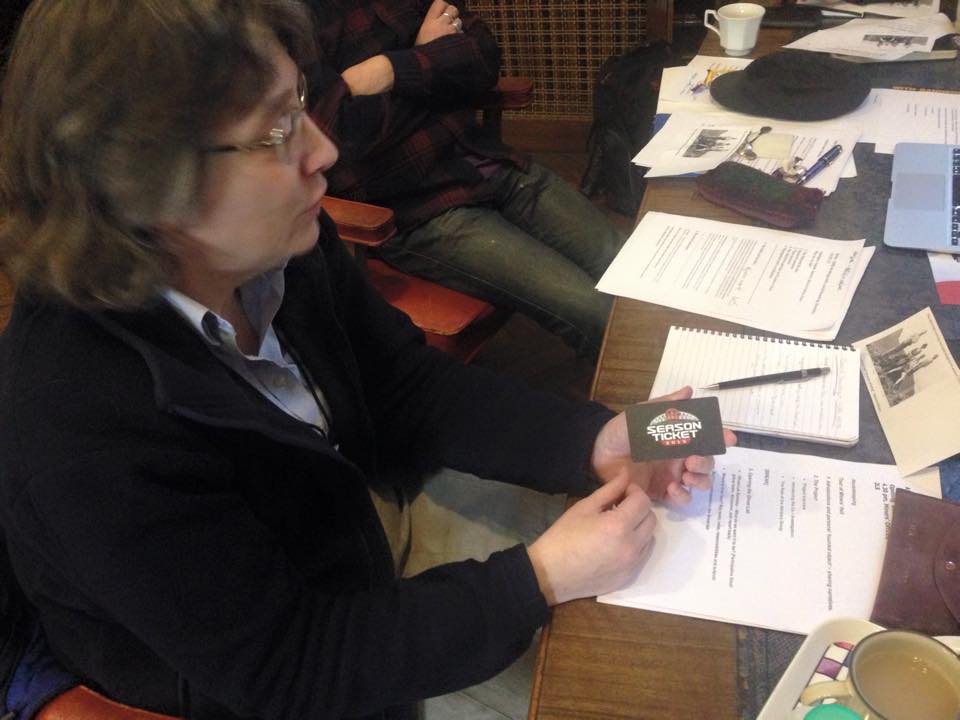 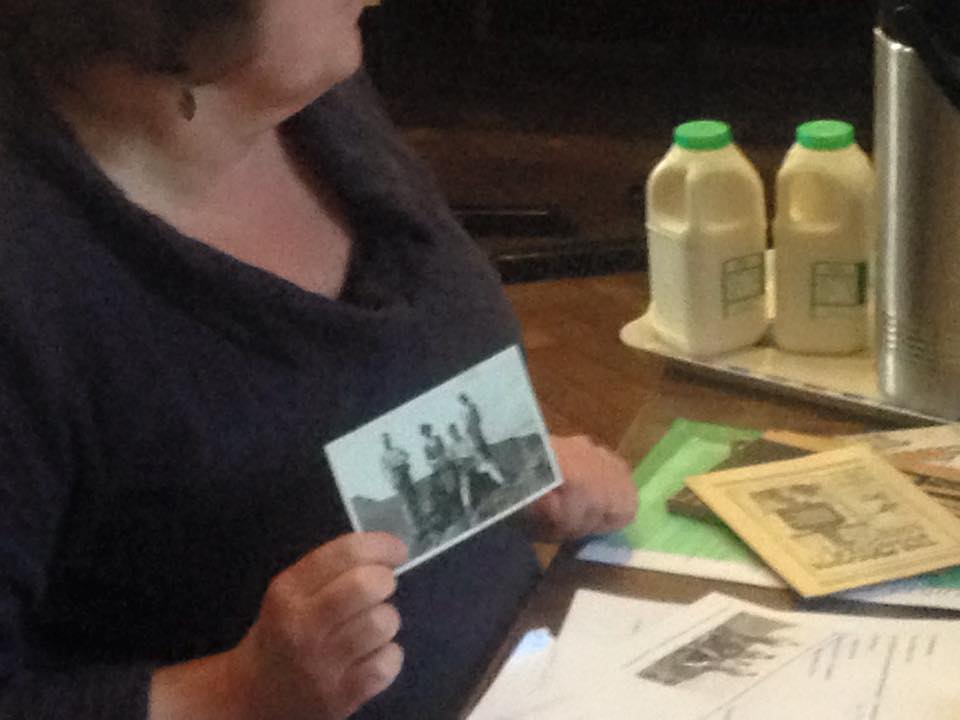 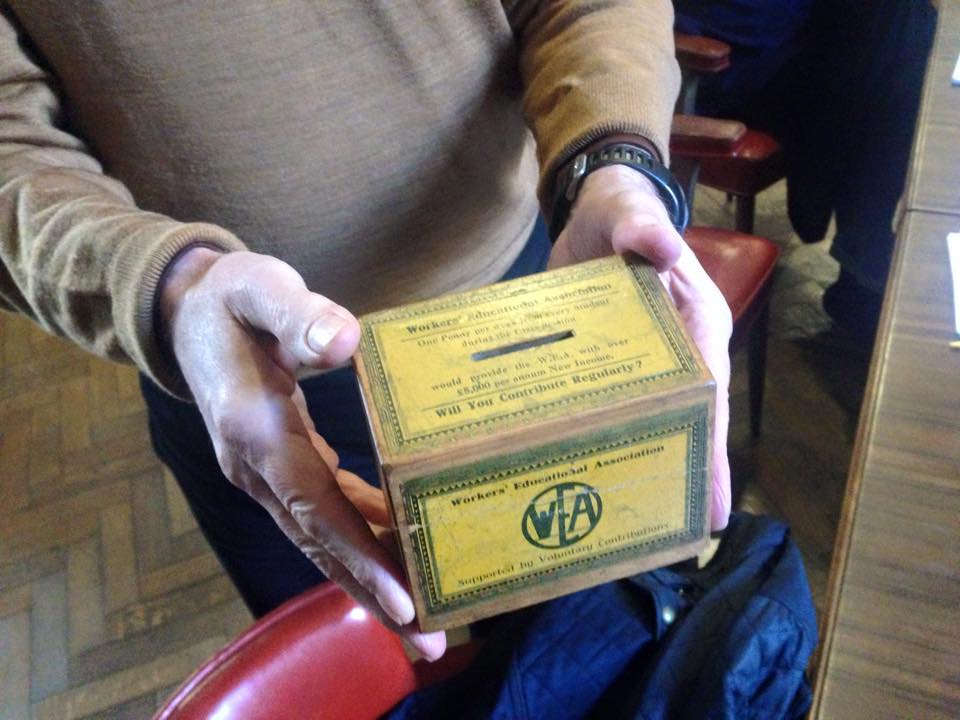 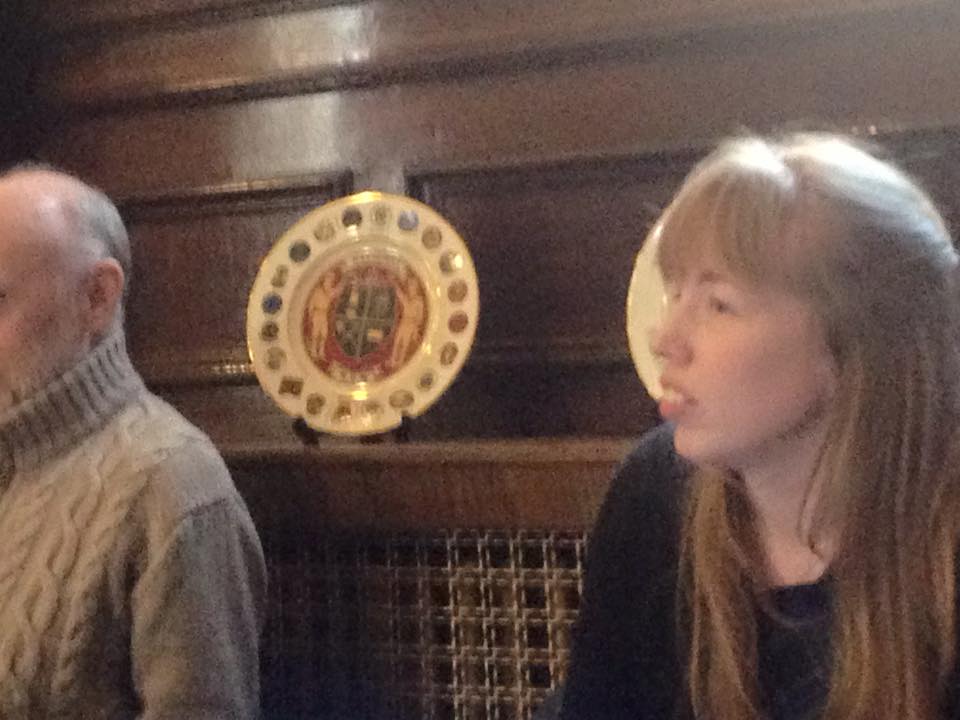 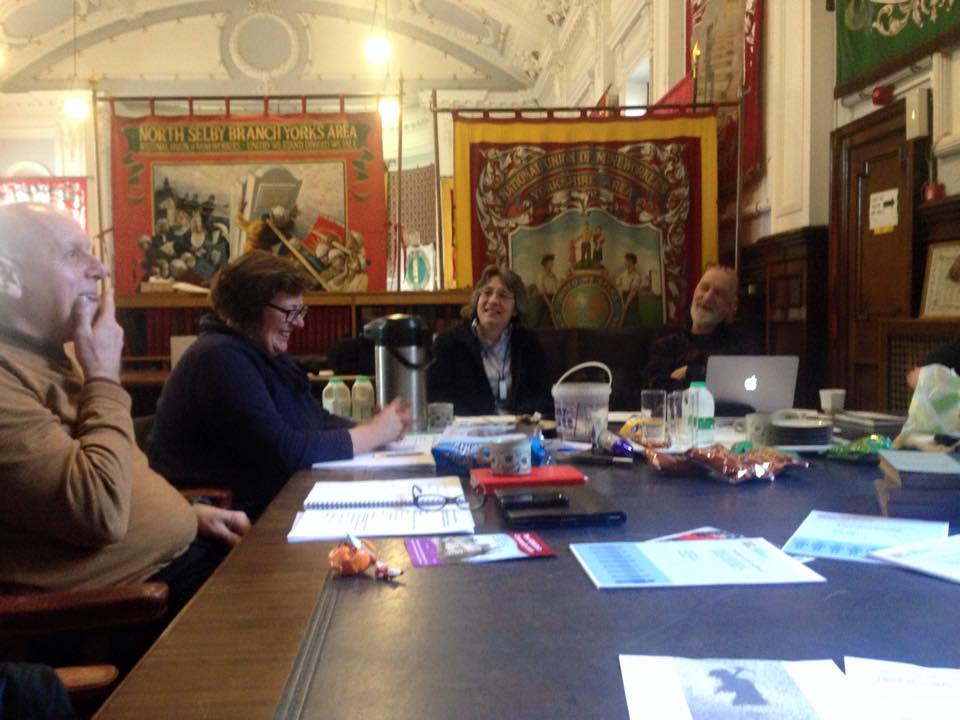 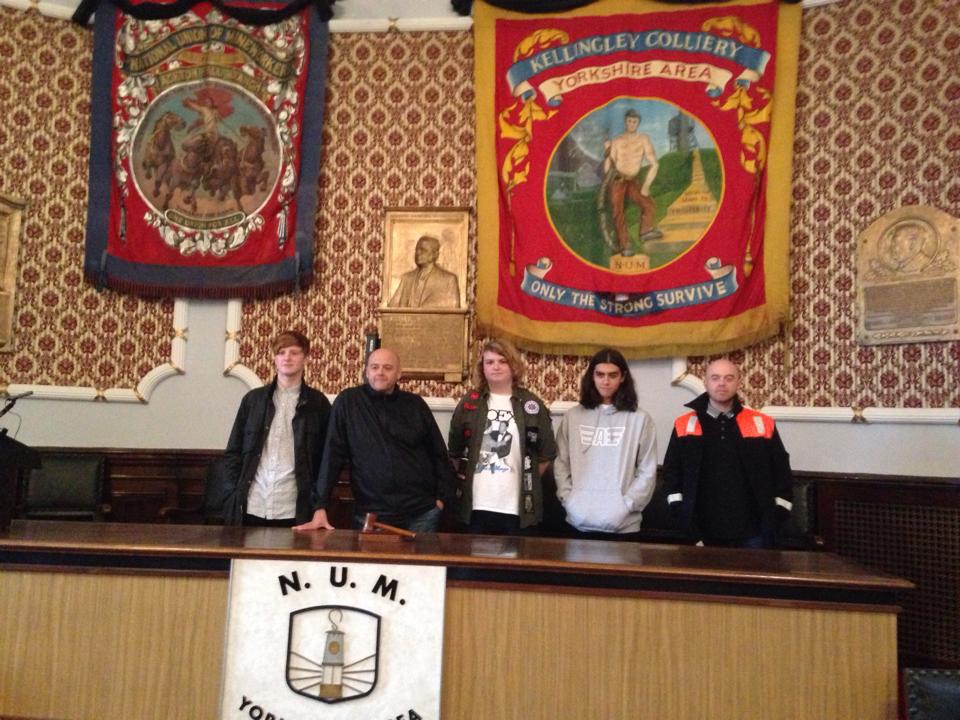 A new community research project Ghost Lab Barnsley got off to an exciting start at the Miners’ Offices in Barnsley this week (see photos of participants’ hands holding their personal ‘haunted’ objects above). With involvement from Unite Community, the project is part of a larger study called Working with Social Haunting, and also includes the Rochdale Pioneers Museum in Rochdale, Lancashire, home of the Co-op movement.

Overall, the project focuses on how past social and political upheavals and conflicts continue to show themselves in the world in many different ways, even when those in power prefer to argue that ‘they are over and done with’ and are ‘best forgotten’. In South Yorkshire, the end of the mining industry and the defeat of the 1984-85 miners’ strike are obvious, but not the only, examples of what we can call a social haunting.

Ghost Lab Barnsley will bring together Unite Community members with a small group of artists and specialists to investigate social ghosts, both in their positive aspect – memories of solidarity and humour, say – and their negative guise, such as the traumatic shock of policing during the strike. Social ghosts are also among us in less obvious ways too: in the landscape, as roads that don’t go anywhere, as journeys to work that nobody makes anymore, as grassed over pit tips that call themselves ‘country parks’, as zero hours work in call centres that carry the names of pits that were renowned as centres of high wages won after 200 years of collective action.

Anyway, if these matters get you going, you now know who to call – call Ghost-Lab Barnsley (well, email Geoff Bright at G.Bright@mmu.ac.uk ) and get involved in shaping the research work, participating in the planned poetry, mapping, comic strip and sound art workshops (dates to be confirmed), or just simply tell your story. What social ghosts can you see? And what is it that they are trying to tell us?

Women’s National Week is held every year as part of the Union’s commitment to encourage and support women’s involvement. It is held alternately during the school term and school holidays. This year, it will begin on Sunday 28th June in the late afternoon and ends on Friday 3rd July. There are four different courses to choose from.

This article by Nigel Nelson originally appeared in the Mirror. 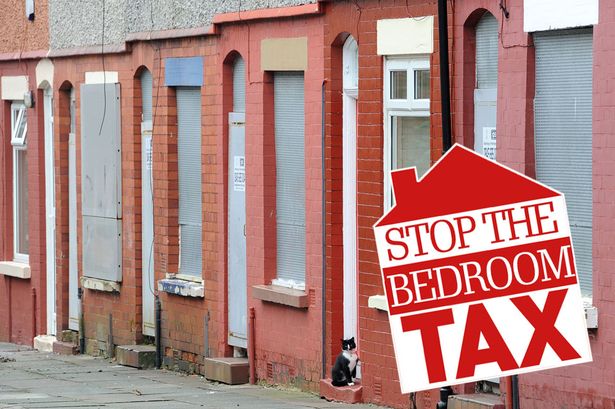 Councils are losing £20million in rent a year as the disastrous Bedroom Tax leaves homes empty.

Nearly 1,500 multiple-bedroom properties are vacant because tenants cannot afford to move into them.

Under the Bedroom Tax their housing benefit has been slashed.

The levy puts an average £14 a week on rent for one extra unused bedroom and £25 for two or more.

The punitive tax has also pushed up rent arrears by £24million because tenants cannot afford the levy.

Many are unable to downsize because there is a shortage of one-bedroom homes .

The waste of good homes comes despite 1.7 million people being stuck on council house waiting lists in England.

As a result lost rental income went up from £107million to £127million.

The 14,000-home Wythenshawe Community Housing Group in Manchester has lost £1million because of vacant properties.

WCHG chief executive Nigel Wilson said: “The awful consequences of the Bedroom Tax are hurting our tenants on a daily basis.”

Coast and Country Housing in Teesside is struggling to rent out some properties. And Cobalt Housing, with 6,000 family homes in Liverpool, has similar problems.

Boss Alan Rogers said: “We have perfectly good three-bedroom homes that people tell us they can’t afford to live in because of Bedroom Tax.”

Ms Reynolds added: “The Bedroom Tax is cruel, unfair and ineffective which is why a Labour Government will scrap it.”

A Department for Work and Pensions spokesman said: “There’s no evidence of a link between empty council homes and removing the spare room subsidy.”

Activists and Regular readers of our blogs will be aware that Unite Ambulance workers have been involved with a long running dispute with the Yorkshire Ambulance Service after they de-recognised the Union. We are happy to announce that this issue has now been resolved! See statement below.

Both parties are resolved to settle all outstanding issues and return immediately to a normalised working relationship. The priority of both YAS and Unite is to ensure the delivery of a first-class ambulance service for the people of Yorkshire and Humberside.

In acknowledgement of the fact that both parties have committed to building a constructive working relationship, an agreement has now been reached that will see Unite formally re-recognised by the Trust.  Both parties will now work together on all relevant issues to safeguard the interests and safety of patients.

Both YAS and Unite are now looking forward to forging a new relationship based on mutual respect and a commitment to the people of Yorkshire and Humberside.

The leader of the UK and Ireland’s largest trade union, Unite today (Monday 26 January) welcomed the victory of Syriza in Greece’s general election, saying it “made hope possible for millions across Europe.”

Commenting Unite general secretary Len McCluskey said: “This stunning election victory is a tribute to the Greek people who have now firmly rejected the disastrous austerity policies imposed on them by the troika of the European Commission, European Central Bank and International Monetary Fund.

“The policies of the troika have done nothing but bring misery and suffering to millions of Greek people. GDP has collapsed by more than 25 per cent, unemployment has soared, wages have been slashed, and welfare provisions and labour protections dismantled. It is no wonder that the suicide rate has risen so dramatically.

“The fight of the Greek people against austerity is the same fight that British, Irish and millions of other working people across Europe are waging against the failed politics that protects the rich and well off at the expense of the poor.

“In voting for Syriza and an end to austerity the Greek people have once again made hope possible for millions of other people across Europe. Unite will watch with great interest the developments in other countries, such as Spain, where anti-austerity parties are also making huge gains, and Unite will continue to play its full part in fighting austerity to make another Europe possible.”

A snapshot from one of the picket lines which were in place across London’s 70 bus garages as over 20,000 bus workers working for 18 bus operators take part in a 24 hour strike to end unfair pay disparities across the capital’s bus network today.

Claiming solid support for the strike the bus workers’ union Unite urged TfL and the mayor of London to ‘bang the bus operators’ heads together’ to get them to sit down collectively with the union to resolve the dispute.

Unite claims a refusal by the operators to address pay inequality has led to pay gaps of over £3 an hour for new starters opening up, with pay varying from £9.30 to £12.34 an hour depending on the company.

Unite are holding an open meeting in Doncaster, at the Trades Club Concert Room on Tuesday 10 February.

For those that weren’t able to get to London on 18 October 2014, it will be a great opportunity to hear from Len McClusky and other speakers, on the subject of a fair payrise for Council and NHS workers. We’ll also be discussing the General Election and what we need to do to get rid of the Tory government. 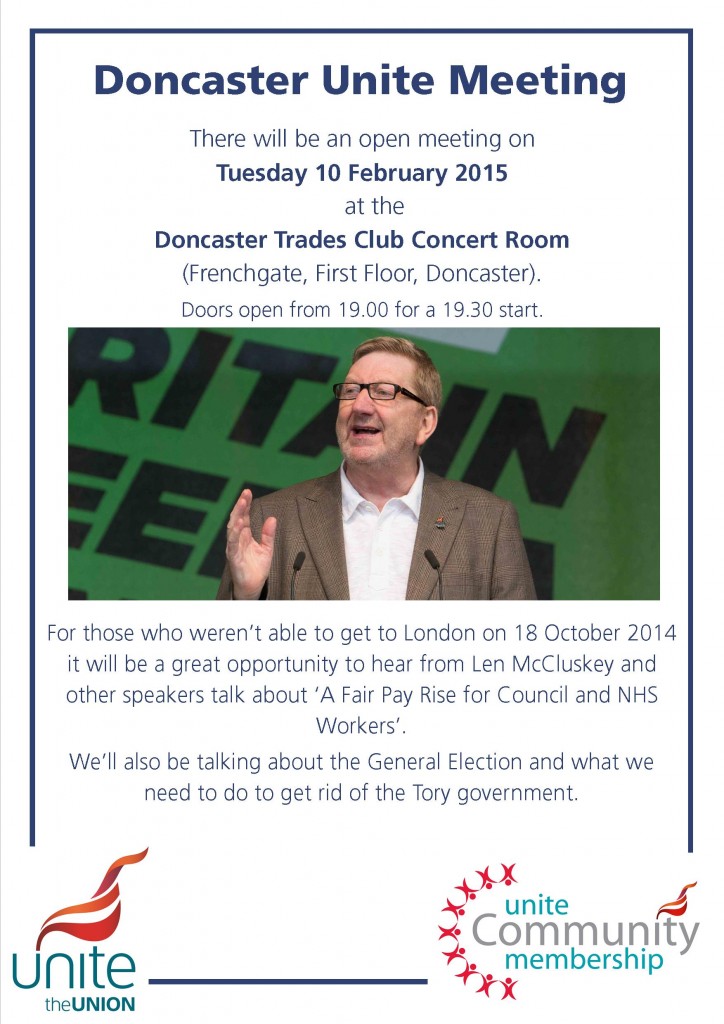