This article by Alex Evan originally appeared in The Star.

Charges against two rail cuts protesters aged in their 60s who were arrested at Sheffield Railway Station have been dropped by the Crown Prosecution Service. 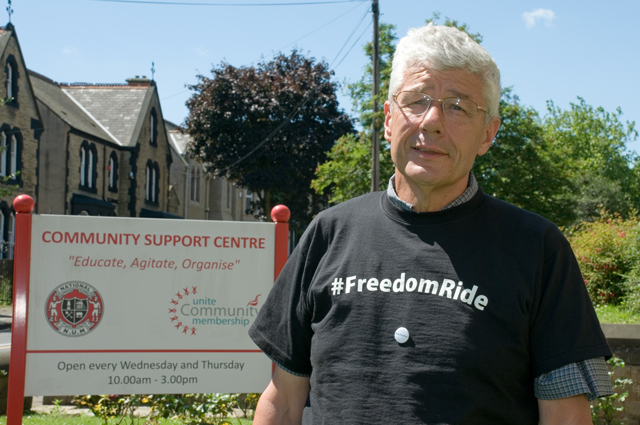 The CPS confirmed to The Star that charges of obstructing police and fare evasion against Tony Nuttall and George Arthur will no longer be taken to trial.

The ‘Freedom Riders’ from Barnsley Retirees Action Group were arrested on June 23 during protests against cuts to travel passes for elderly and disabled people.

The pair, aged 65 and 64, were handcuffed, arrested and bundled away by British Transport Police officers – prompting outrage from Sheffield Disabled People Against The Cuts and BRAG.

A video showing Mr Arthur being arrested by a group of officers and security guards went viral online.

Comments on The Star’s website accused officers of being ‘heavy handed’ in the way they dealt with the protesters.

The pair had been due to face trial at Sheffield Magistrates Court on December 8.

Mr Nuttall said he felt ‘relieved’, and that the Freedom Riders campaign will continue to protest against cuts to rail passes for the elderly.

He said: “I personally feel very relieved but I think more than that, I feel pleased for the travel pass campaign.

“It’s not the final victory but I think this will be a real boost to the campaign.

“People at our meeting were elated.”

Mr Nuttall said himself and Mr Arthur have filed formal complaints against British Transport Police for the way the pair were arrested.

The BRAG protest organised for the date of the trial will now be changed to a ‘celebration’ of the charges being dropped, he said, with transport being laid on across South Yorkshire.

That will be followed by the group lobbying the next meeting of the South Yorkshire Transport Committee on December 15 at Regent Street, Barnsley, and again on January 5.

The ‘Freedom Rides’ which involve protesters travelling on trains across the region without paying as a form of protest, had been put on hold while Mr Arthur and Mr Nuttall faced trial.

But Mr Nuttall said the rides could re-start in January if the group is unsuccessful at getting free travel for the elderly reinstated.

He added: “This is another win for the freedom riders in our on-going battle. We won round one in June when we got back free travel for disabled people and half-price on the train for older people.

“Now we have won round two.

“Round three is coming up and we intend to keep on fighting as hard as we can.

“We are not going to do any freedom rides at the moment.

“But If the Transport Committee and the Combined Authority do not give us a commitment to reinstating free train travel by January, then we will re-start the freedom rides.”