Many of you may have seen the Daily Record today saying the Scottish Government has agreed to fully mitigate the cost of the Bedroom Tax here. I have been holding off messaging while I tried to add up the sums of money, but I think this is something we can be very happy about.

Last week, community member and No2Bedroom Tax campaigner Alan Wyllie and myself were at the Scottish Parliament’s Welfare Reform committee giving evidence in favour of Alan’s petition calling for the Scottish Government to make available the full cost of the rent through Bedroom Tax, around £50 million. With this announcement of their willingness to make available further funding, the government have accepted this argument and shown their willingness to make the money available. There is a cross party consensus about this, with Labour set to vote for the SNP government’s budget for the first time since they came to power in order to support this measure.

The unresolved questions are over exactly how this money will be distributed to tenants. The Scottish Government and local authorities already have the maximum top up money in their funds for Discretionary Housing Payments that they are allowed under Westminster rules, and the SNP government want the London government to increase this. (There’s more on this rather abstract legal issue here: http://lallandspeatworrier.blogspot.co.uk/2014/02/legalling-nicolas-bedroom-tax-plan.html )

So there is still some legal working out of it to do for implementation, but the key point here is that campaigning activity has forced the Scottish Government to move towards a position of full mitigation, which in the short term is effective abolition from the point of view of tenants. In our evidence to Holyrood, both Alan and I were clear we understood this is an emergency measure to keep people in their homes for the next couple of years. Within that time frame we hope for a government that will abolish the Bedroom Tax, either through a Yes vote in the referendum or a Labour victory in 2015. (Incidentally, it will be interesting to see the impact of this decision on the referendum campaign.)

However, the key message here is that campaigning works. Unite Community has consistently supported and initiated meetings, protests and direct actions over the last year plus, and we have worked alongside the No2Bedroom Tax campaigners who are also Unite members. It’s only through the constant campaigning pressure that we got Ed Milliband to take a clear position, and the MSPs last week told us privately that activists and the grassroots was what had forced the parliament to sit up and take notice. This is exactly why people wanted a Scottish Parliament – as protection for when the Tories came back. On this occasion the democratic process worked and they listened to what people wanted. Now lets hammer this across the rest of the UK, if it’s possible here it puts the nails in the coffin of this hated policy for England and Wales as well.

There’s another good timeline piece by Govan Law Centre showing their involvement with the campaign and giving some background here as well.
www.govanlc.blogspot.co.uk/ 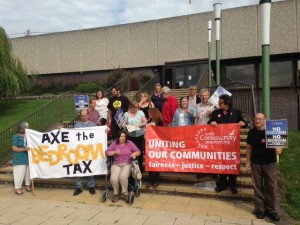