Short speeches inc one by David Kirkham of Sheffield Uncut who highlighted the fact that IDS seems to have slipped through the fit to work scheme.

The procession set off led by union banners, people held placards with slogans such as;

” disabled people are not disposable”

The crowd proceeded to march to the DWP building on West St.

Supported by cheers and whistles from people hanging out of windows of nearby buildings and some motorists hooting in support.

5 activists immediately entered the building unchallenged and proceeded to chain themselves with lock to the struts of the central staircase. They held a huge banner which read:

Outside the remaining protesters lined the street and began a series of short, punchy, speeches which highlighted the issues of the protest. Not only to the DWP and the SYP who had been called to attend but to passers-by, who were in general disgusted at the treatment of sick and disabled people.

As the writer of this report, I witnessed no negative feed back from the general public. It is important to note that.

Speakers on the day were many and came from varied backgrounds.

Some spoke as union or group reps some as individuals.

Napo’s rep highlighted the link between the cause and the cuts to legal aid and how one drastically affects the other.

Chris Skidmore form NUM talked about people who had been diagnosed with RSI (vibration white finger) by vascular surgeons, only to have it quashed by ATOS staff. He also highlighted to need to screen and assess staff for medical experience and qualifications and the importance of all constituents badgering their local MP to question the processes that are currently in place.

He said that sick and disabled people suffer continual abuse because they are labelled scum and scroungers even if they don’t work due to work related injury.

Unite member highlighted workfare practices.
Cerco. D4E
The cost of implementing workfare is £5.5million.
The fact that companies are taking advantage of the scheme while IDS scapegoats foreign workers for the lack of jobs.

Shouts from the assembled crowd of ” it is slavery” were met with applause and agreement.

Jenny Poulton of Sheffield University Disabled Students Committee said, “what does it mean to be fit for work?”

Instead of telling people they are not fit for work, why aren’t employers being told to create jobs for disabled people? Some people are unable to fight back, or even were unable to attend the protest because they are trapped in their homes.

Disabled people are not useless and the world needs to stop telling them that it doesn’t want them. 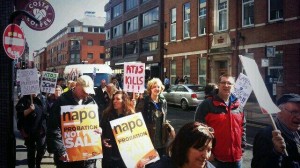 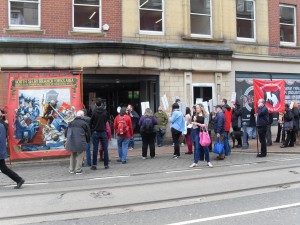 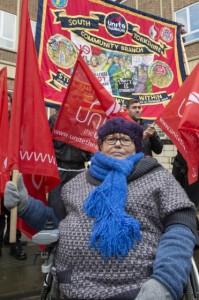 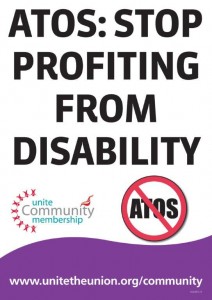 Unite assistant general secretary Steve Turner said: “The government’s own figures last year showed that 10,600 people died within six weeks of being declared ‘fit for work’ by Atos. This alone should have set alarm bells ringing that the assessments were not fit for purpose.

“We are calling on the government to stop this degrading policy and introduce a fairer transparent system that restores dignity to the sick and disabled.”

Over 40 per cent of cases where people have been deemed fit to work, and had their benefits cut have had their appeals upheld. However the appeals process can take months while some of the most vulnerable disabled are plunged into poverty.
The ‘tick-box’ nature of the tests does not cater for the complex nature of peoples illnesses, particularly for those with mental illness. This has also led, in some cases, to those with long-term degenerative and terminal illnesses, such as Parkinson’s and cancer, being told they are fit for work.

Unite, the UK’s largest union and the Durham Miners Association (DMA) have joined forces to open a community centre in Red Hill, Durham which will support the local community. The new centre at Miners Hall, Red Hill, Durham, Co Durham, DH14BD, had its “Grand Opening” on Friday 15 November.

With devastating cuts, such as the Bedroom Tax, housing benefit cuts and ATOS to name a few, the centre will introduce Benefit Buddying, which will offer peer-to-peer support for many of the most vulnerable people who will suffer as a result of these cuts and who have difficulties with benefit claims. Unite Community aims to bring together and help give those in our society who would not normally have a voice.

Today Nov 5th unite community activists in Sheffield, together with activists from uk uncut., D.P.A.C and the people’s Assembly held a picket of private for profit Atos. The company responsible for huge hardship and misery for many disabled people. Speakers called for an end to the work capability assessment and an end to the profit motive in public services. The 60 or so activists and supporters then marched to a local porn shop CEX where sacked unite member, Oliver Clayton had called a picket over zero hours contracts demanding his job back. Around 130 people manned the demonstration at CEX after striking probation workers joined the demonstration! Spontaneously songs of solidarity forever and chants of the workers united will never be defeated were heard. Both demonstrations then marched jointly to Sheffield Town Hall to join people collecting for food banks, bedroom tax campaigners and others.

What a Fantastic day of Action!!!
Next Unite Community Meeting in South Yorkshire is on the 12th of November in Sheffield at the United Reform Church come along! Get Involved! Unite and Fight!!