In an unlikely partnership, Unite Community Sheffield have joined forces with a nightclub to bring supplies to Fir Vale food bank this Christmas.

Management at The Plug nightclub in Sheffield city centre opened their box office for food donations last month and is working with the Unite community team to deliver supplies to the food bank.

Certainly, the strains felt by the poorest in the country are even tougher at this time of year.

“While there are people who have been put in a position where they can’t afford to even put the basics on the table, or have to choose between feeding their children or themselves.

“Sheffield is the fourth largest city in the sixth richest country in the world, it’s completely disgusting that this is happening to people,” he added.

The steel city currently has 16 food banks, but none quite like Fir Vale.

“Anyone who is in need of food can use Fir Vale without having to go through the rigmarole of jumping through hoops to get referrals,” David explained.

“When people are struggling with the realities of low pay, zero hours contracts and cuts to the social security the last thing they want is to have to justify themselves as to why they should have some food just to stay alive over Christmas,” he added.

Unusually Fir Vale is ran in the spirit of a café; at 2 o’clock each day it welcomes people in where tea, coffee, fresh fruit, cake, and biscuits are all freely available to enjoy in a comfortable, friendly environment.

After this, the food bags are distributed and people go back to their homes.

“We run it this way because it would be very undignified for people to queue up around the block to get their food bag. It would bring back images of the Victorian workhouse era,” said Reverend Louise Collins, co-founder and volunteer of Fir Vale.

“Using a food bank is certainly not a highlight in your life, but given that there is a need, we do try to make it as pleasant as possible for people,” she added.

But despite the efforts of the community to retain optimism, the increasing need for food banks highlights a grim failure by the government.

“They are only a sticky plaster on a much bigger problem that, from what I’ve seen, lies in the benefits administration,” Reverend Collins said.

The government rejected evidence showing the rise in demand for food banks as a direct result of Tory welfare reforms, with millionaire welfare minister Lord Freud claiming that there would always be “infinite demand” for free food.

“This is obscene language coming from these people, especially when you consider wining and dining that goes on and the expenses they are allowed to claim,” David Kirkham commented.

“The people who run the country can justify their huge wealth and privilege because they have all the power,” he added.

“If people want the choices in life that they deserve they are really going to have to fight and take action together as a community and overturn what is happening.”

Unite Community members have donated food to a Barnsley kitchen for people living in poverty, a large number of who are homeless. The charity cooks over 350 hot meals every week. A sad reflection of Tory Britain. 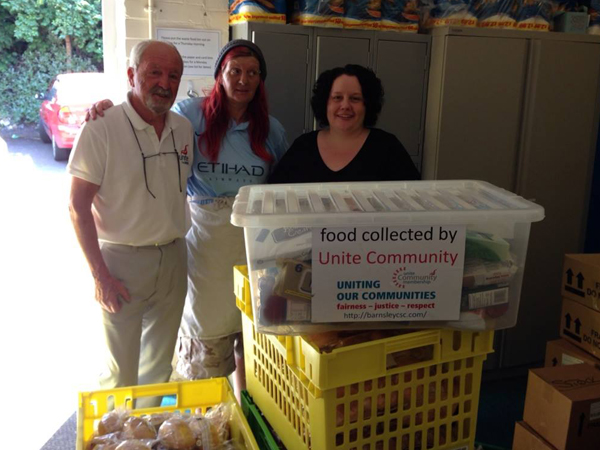 Barnsley Unite Community members support the local soup kitchen. The charity provides over 300 cooked meals a week for the local community, living with poverty. Our community members also help with cooking, cleaning and serving, as well as donating food parcels collected and paid for by our Industrial members. Solidarity!

More books from the Trade Union Movement have arrived for the Barnsley Unite Community centre Library, come down and have a look! Agitate Educate Organise! 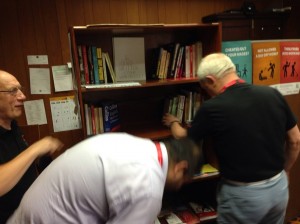 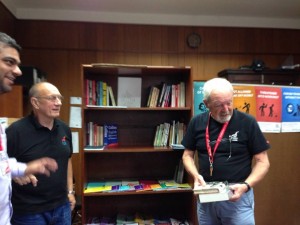