This article by Duncan Milligan originally appeared on UniteLive. 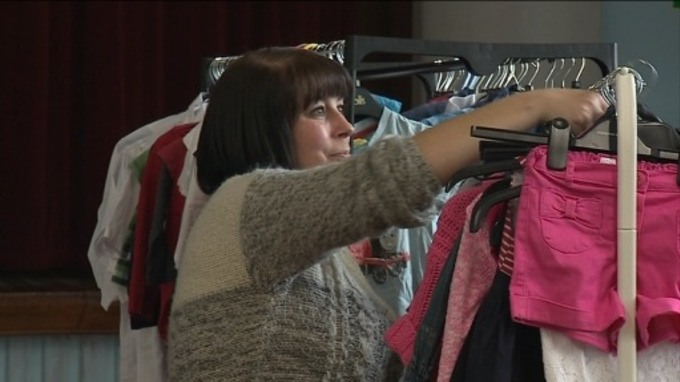 The £64,000 question – why did a Tory MP with rich business backers attack Unite members helping the poor?

Unite Community members who set up a socialist clothes bank in Durham for those too poor to afford charity shop clothes, have been criticised by a Tory MP for being motivated by “party politics”.

Unite members hit back saying he should be more concerned about why such a service was needed rather than attacking those trying to support the poor.

James Wharton, Tory MP for Stockton South has registered £64,000 in political donations and sponsorships in the last 12 months all from big business backers. Mr Wharton has a track record of wanting to cut welfare spending and to stop increasing benefits in line with inflation.

He has also backed the bedroom tax which forces those on housing benefit to either move house or lose money. He is firmly opposed to taxing bankers’ bonuses.Reacting on local ITV News to the launch of the clothes bank Mr Wharton said, “We have to recognise this is six months before an election. This is the Socialist Clothes Bank. It’s been set up, backed by a number of trade unions, and there is more than a hint of party politics about what’s going on.

“This is as much about making statements about politics as it is about doing good things. I welcome one; I’m not convinced about the other.”

Angela Appleby, a Unite Community member who works with the project said the MP’s intervention was “totally unexpected, he is from a constituency many miles away and there is no reason why he should have said anything.

“One of our members, Dawn Wilson, had the idea when she heard one woman say she could only afford one pair of shoes and had to decide which of her kids got the new ones. We took clothes as donations and operate the clothes bank alongside a local food bank.

“James Wharton’s comments are shameful, he has no idea of what is happening in an area outside of his constituency and the desperate need that people are in.”

Joe Rollin, Unite Community Coordinator for the North East, Yorkshire and Humberside said, “To seek to undermine the huge voluntary effort put in by our members getting the clothes bank up and running in order to score cheap political points is unacceptable.

“The fact that he was 100 per cent wrong in his analysis is almost beside the point – the only person playing party politics here is Mr Wharton himself.

“Those organising the clothes bank have had to seek donations of clothes and help from ordinary people. They have not had access to the sort of donations flooding in to keep Wharton safe in his parliamentary seat.”

And strong criticism came from local MP, Labour’s Grahame Morris. “James Wharton is oblivious to the hardship and suffering of everyday people caused by his government’s policies of austerity,” he said.

“At every opportunity, he has voted in support of cuts to social security; raised taxes which hit the poorest hardest such as VAT; introduced cruel and callous policies like the bedroom tax impacting thousands of disabled families and allowed a system of sanctions to embed in the culture of DWP which has resulted in thousands of people, already in hardship, losing their benefits for minor infringements.

“Instead of attacking volunteers and charity workers trying to help the most vulnerable in society, he should look at his own government’s actions which has led to the need for and the rise in the number of food and clothes banks.

“I think before criticising, this privileged Tory MP should visit the clothes bank and see first-hand the difficult circumstances many people are facing in our communities,” added Mr Morris.

Mr Wharton, educated at the £26,000 a year St Peter’s school in York was a corporate lawyer before entering parliament in 2010. Between October 2013 and October 2014 he has registered £64,000 of political donations from wealthy Tory business backers.

This includes £25,000 from Peter Cruddas who made a multi-million pound fortune in banking.

It also includes donations worth £15,000 from colourful Russian businessman Alexander Termerko whose engineering company is based in the north east.

Mr Termerko has donated hundreds of thousands of pounds to the Conservative party. The Russian government failed in its attempts to extradite him on fraud and other charges, the British judge saying the Russian prosecution was politically motivated.

The now UK-based Termerko spent £90k on a bronze bust of Cameron at a fundraising dinner and is in the “leaders’ group” – membership of which includes dining rights with the PM.

Mr Wharton has also registered £14,000 of donations from United and Cecil which is a private dining club for largely anonymous Tory donors and operates out of a converted barn in Iver, Buckinghamshire.

United and Cecil target donations at Tory MPs in marginal seats such as Stockton South, where Wharton is clinging to a slim 343 majority.

Wharton’s campaign has recently been boosted by a £10,000 donation from JCB research run by Lord Bamford. Bamford is one of the Tory Party’s main financial backers and indicates the seat is a key marginal.

UNITElive contacted Mr Wharton by email to ask if he had anything to add to his earlier comments. There was no reply at the time of publication.

VOLUNTEERS from a new campaigning community centre took to the streets to highlight problems caused by welfare cuts.

Unite community volunteers based at the new part-time community and advice centre at Red Hills, in Durham City, staged an information event in Durham Market Place on Monday (January 6).

They handed out leaflets and offered advice on avoiding debt.

They say the Government’s welfare reforms are putting people in need.

Robbie Faulds, one of the volunteers, said: “Everyone we spoke to was in agreement that people are hurting, especially after Christmas.

“Even if they weren’t experiencing difficulties themselves, they invariably knew a friend or family member who would benefit from the advice we will be offering at the centre and understood the need to campaign against the cuts which are so damaging to the most vulnerable in our society.”

The Community Support Centre is open from 10am to 3pm every Wednesday and Thursday. For more information, visit durhamcsc.wordpress.com.

A MINERS’ hall is to become a part-time community centre and campaign base to fight the Government’s welfare reforms.

The trades union Unite and the Durham Miners’ Association (DMA) have teamed up to open the DMA’s headquarters, the Miners’ Hall, at Red Hill, Durham City, to the community two days a week.

Visitors will be offered the chance to learn new skills, help with welfare issues and support to find work.

Supporters hope the centre will also be a hub for local campaigning against reforms such as the so-called bedroom tax and other benefit cuts.

A grand opening will be held on Friday, November 15, after which the centre will be open on Wednesdays and Thursdays from 10am to 3pm.

The opening will be addressed by Len McCluskey, Unite’s general secretary.

Karen Reay, Unite’s regional secretary, said: “This exciting development in conjunction with the Durham Miners’ Association brings Unite back into our industrial heartlands.”

Dave Hopper, from the DMA, said: “We have opened the community support centre in partnership with Unite in a response to the vicious attacks on the benefits system brought in by the Con-Dem government.”

Durham’s will be the fifth such centre Unite has opened this year.

You can find the original article at The Northern Echo here.

Unite, the UK’s largest union and the Durham Miners Association (DMA) have joined forces to open a community centre in Red Hill, Durham which will support the local community.

The new centre at Miners Hall, Red Hill, Durham, Co Durham, DH14BD, will have its “Grand Opening” on Friday 15 November from 2pm where the public and press will be able to meet the volunteers and see what the centre has to offer.

With devastating cuts, such as the Bedroom Tax, housing benefit cuts and ATOS to name a few, the centre will introduce Benefit Buddying, which will offer peer-to-peer support for many of the most vulnerable people who will suffer as a result of these cuts and who have difficulties with benefit claims.

With unemployment running at 22,700 in County Durham – the largest number of any local authority area in the North East and over 4,000 unemployed young people – the centre’s services will be a vital resource for the local community adversely affected by government’s cuts to services and social security payments.

Unite regional secretary Karen Reay said: “This exciting development in conjunction with the Durham Miners Association brings Unite back into our industrial heartlands. Our members can be confident that we are aware of their local issues and that Unite is seeking to work with the people of Durham to address them.

“By working with local campaign groups and politicians we can ensure that our members’ voices are heard and that issues that matter to them are top of the local agenda.”

David Hopper of the DMA said: “We have opened the community support centre in partnership with Unite in a response to the vicious attacks on the benefits system brought in by the Con-Dem government. The last Conservative government decimated our coal industry now this government is making the people of the North East suffer all over again.”

Unite regional community coordinator Joe Rollin said: “I am really pleased that we are opening this centre in Durham where the local community is in great need of support and this centre will go some way to providing that assistance.

“Our experience of working with local groups and individuals ensures that issues which matter to people are campaigned for. This centre will become a focal point for making those changes.”

Unite has already opened four such centres this year – in Barnsley, Belfast Cinderford and Tower Hamlets in east London.