Belonging.The Power within is a film about how unions are giving a voice to people and communities devastated by food bank Britain.

A film about people. People who just so happen to be trade unionists. We shall look through their eyes at the role of unions in leading us out of food bank Britain – by rebuilding communities and giving a voice to those people, in and out of work, devastated by economic polices.

We want to show that unions are as important and as necessary now as they have ever been, particularly in helping people find an effective voice. We shall dispel the stereotype of union members as white working class men and instead show a diverse mix of people. We shall show how union members are just people holding values of community, unity, worth and solidarity, all wanting a better life for themselves and their children, and believing this can be achieved by harnessing the power of belonging.

The website will be fully launched on 27 May. Visit the site here.

Unite Community members were among the Anti-Fascist demonstrators in Rotherham yesterday, The EDL had a worryingly high turn out on the demonstration, proving that our movement cannot become complacent, rumors of the demise of the English Defense League are obviously exaggerated.

The far right are trying to capitalize on working peoples genuine fears and frustrations as the Con-Dem Austerity bites, causing misery and hardship for many people. We must stand united in our opposition to their message of division and hate. 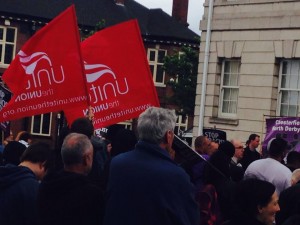 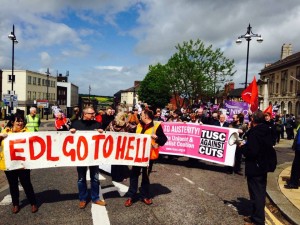 Unite Community members from Doncaster, Grimsby, Durham and Leeds marched through the streets of York on Saturday to protest at the Lib Dem Conference. The March also had added significance because it was also International Women’s Day which was reflected by having an all-female platform of speakers listed below. Fantastic work from our Unite Community Members once again United We Bargain, Divided We Beg.

Kay Carberry – Assistant General Secretary of the TUC. Kay will be outlining ‘the better way’ our society, economy and country needs. Kay will highlight the alternatives to austerity, why Britain needs a pay rise, the importance of publicly owned services and need for a real recovery for all parts of the country.

Kate Fox – comedian, poet, writer and BBC Radio 4 regular. She’s been a Poet in Residence for the Great North Run and the Glastonbury Festival and originally trained as a radio journalist, working in Yorkshire and the North East. She has toured comedy shows all over the country and will be sharing a new poem about the Coalition government at the rally in York. www.katefox.co.uk.

Sue Marsh – disability campaigner & blogger. Sue is an inspiring campaigner who through her blog http://diaryofabenefitscrounger.blogspot.co.uk/ has helped make a difference and given people with disabilities a louder voice over what the government is doing right now.
Fran Heathcote – PCS DWP Group President. Fran lives in the North of England and will be taking on the attacks on those in need of social security, the culture of TV shows such as Benefits Street and the scapegoating of the unemployed. She will be highlighting the huge potential to fully fund public services through clamping down on tax avoidance.

Nikki Sharpe – social entrepreneur and councillor in Sheffield. She will be highlighting the gutting of local government by the Coalition with the poorest areas hit hardest. Nikki will highlight Nick Clegg’s betrayal of Yorkshire & the North.

Megan Ollerhead – campaigning student from the University of York. As well as highlight the repeated broken promises from Nick Clegg’s party, Megan will speak about the cuts of Higher and Further Education and the removal of the Educational Maintenance Allowance that helped young people from modest backgrounds to stay in education.

Liz Mawson – NHS worker in Yorkshire and an inspiring workplace rep. Liz will be exposing the Coalition’s mythical ‘ring-fenced’ funding for the NHS and the scale of privatisation that is taking place without any democratic consent.

Kate Lock – environmental columnist, author, researcher and campaigner. Kate is a published author and writes a regular ‘green’ column for The Press in York. She has worked for the Stockholm Environment Institute and is Chair of the York Environment Forum. Kate will be highlighting the environmental impact of austerity cuts and outlining how the green economy can be a win-win for jobs, young people and the planet. 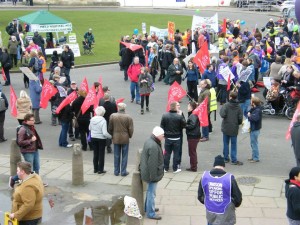 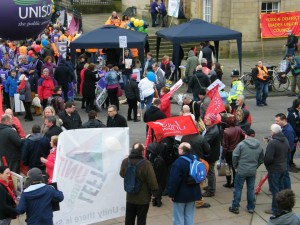 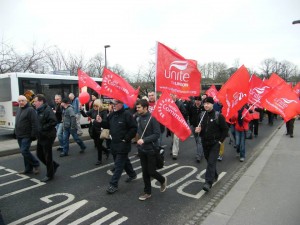 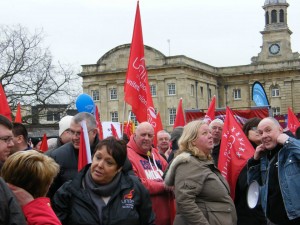 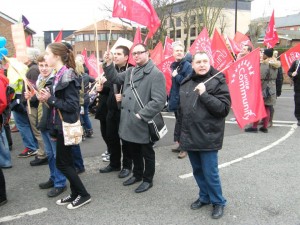