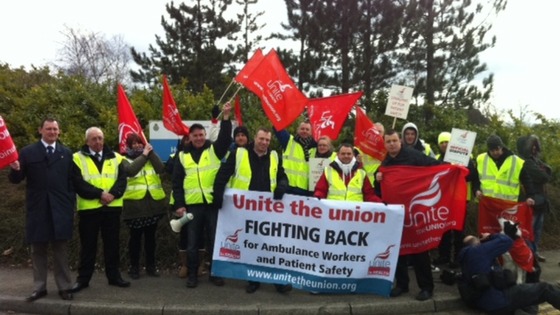 This industrial action applies to all aspects in connection with Unite’s de-recognition within Yorkshire Ambulance Service that took away Unite members chance to share meaningful engagement in the recent implementation of the Trust’s workforce plan.

This includes the pending introduction of a new rota ‘package’ on the 10th Feb. Unite and it’s members have many concerns over this package including new meal break arrangements with increased windows, the withdrawal of subsistence payments – both for out of window and away from base which were imposed on the 20th Jan 2014. To impose this ban on subsistence payments represents a departure from the national terms and conditions of Agenda for Change. This also means our members working longer without meaningful rest breaks – the length of which have also been shortened.

There are also issues around members being forced to work 12 hour shifts and enforced removal of members from rota lines – including full and part time staff, many of whom are being moved from their base stations incurring significant increased travel times.

Also of concern is the increased recruitment of the Emergency Care Assistant (ECA) role onto frontline ambulances with minimal training and the downgrading of Assistant Practitioner (AP) staff into this role. We still believe that these staff need better training allowing them more autonomy and also believe this role should at least be an Agenda for change Band 4 level and not the Band 3 that has been put in place.

YAS repeatedly states that this role works well in other services – yet time and time again this is proved incorrect. East of England ambulance service have recently abandoned the role as ‘not fit for purpose’, following others such as West Midlands, London and the North West. It is simply not fair to these staff or their colleagues to expect them to learn their craft ‘on the job’.

All this leads to a demotivated and increasingly tired workforce that is less clinically qualified to deliver excellent patient care.

The campaign against cuts to frontline ambulance services is gathering pace nationally and this includes the incredible acceleration nationwide of the use of private ambulances – YAS being one of the front runners in this in recent months. Despite assurances that we would only use private providers when absolutely necessary, these were used extensively throughout December.

Following a successful a parliamentary lobby in Nov 2013, Andy Burnham and the Labour party shadow health team are now very interested in these issues, as well as many local MPs. All of these are now supporting us in our campaign both in terms of patient safety and the use of private providers as well as our de-recognition. None of the MPs we have spoken to have seen the like of this de-recognition before within the NHS. Unite were de-recognised within London Ambulance Service (LAS) and now YAS have de-recognised both the GMB and Unite but this has not happened in other areas of the NHS health sector on such a huge scale.

This must be seen as an attempt to silence our members and cannot be tolerated. All we ask for is the chance to discuss issues in a fair and reasonable way – on member’s behalf with full negotiation rights. We are now asking for YAS to engage with Unite and our members in a constructive and meaningful way and enable us to be part of shaping the future of the NHS ambulance service we all work for.

No clinician ever wants to go on strike and this is always a last resort but if the Trust won’t look to our immediate re-recognition – what option does it leave us? We will hope for the opportunity to engage in discussions with the Trust with a view to re-recognition and to discuss patient safety concerns but if not – the action will go ahead on the 1st and the 3rd Feb – with further days to follow.

I am pleased to report that we have recently had a large influx of new members and more members have also expressed an interest in joining the action this time. This is entirely due to the fact that staff are seeing Unite as the union that will stand up and be counted and fight for their rights as members. I think there was a degree of nervousness previously and a hope that maybe the de-recognition would be reconsidered by the Trust quickly but obviously – this hasn’t materialised. As we now approach the first anniversary of the de-recognition on the 4th Feb 2014 this becomes ever more difficult.

We will be in touch with the details of picket lines and we may also be running demonstrations in local towns and cities. If there are enough members on other stations to mount a picket line or organise a demonstration – we will do this locally, with support.

This is where we would ask for solidarity from you as supporters who have previously asked for information on getting involved in our fight. Local help on the day and attendance at rallies and picket lines is very much appreciated and shows solidarity with our members, who are spread far and wide.

Let’s make this a positive and successful action with public support! 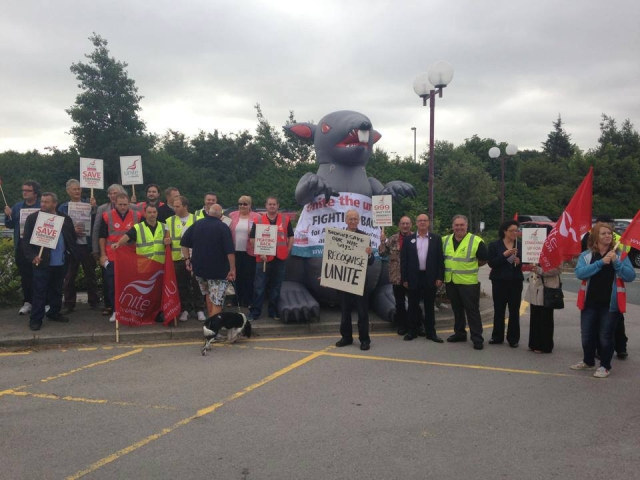 On the 3rd February – picket lines will be running in the same locations, as well as other local stations where this is requested but for the duration of the strike (4 hours – 1500-1900 hrs)

The picket lines will be in operation between various times, depending on locations, to be confirmed.

There will also be a demonstration in Hull city centre at Monument Bridge from 1400 hrs.

Please make every effort to attend demos and picket lines in your area – this isn’t just a withdrawal of labour but a chance to demonstrate our commitment to the public of Yorkshire.