This September will mark the 30th anniversary of the closure of Yorkshire Main Colliery. This changed our Village from a thriving vibrant community to one that was unrecognisable. The strong community cohesion achieved during the life of the ceolliery, and supported by our local institutions, soon began to unravel. We all witnessed the infrastructure crumbling year after year, with the green shoots of recovery taking over 25 years to emerge from the burned out housing estates.

On Saturday September 5th, the Heritage Trust are holding an event in the Miners Memorial Garden, followed by entertainment in Edlington Top Club. We will be unveiling and presenting to the Community a replica of the Unions 1920 Banner funded by the Heritage Lottery fund. This was made with the support of Northern Banners and used art work provided by students from Sir Thomas Wharton Community College. Strap lines for the Banner poles have been provided by the family of primary schools.

We will also be presenting a Timeline of the Collieries proud history imbedded in to the large stone in the corner of the garden. This was sponsored by Keepmoat, and will be supplemented by a piece of Pit Art sponsored by Profab Engineering.

During the event in the Garden, entertainment will be provided by City of Sheffield Pipe Band, Charlotte Leese vocalist, plus performances by local community groups.

Following the event in the garden a reunion will be held in the Top Club, with folk music & a Gig supported by top bands for the younger generation.

On site catering will be available in the car park adjacent to the club.

Bringing back the Collective Spirit – Keep the Faith 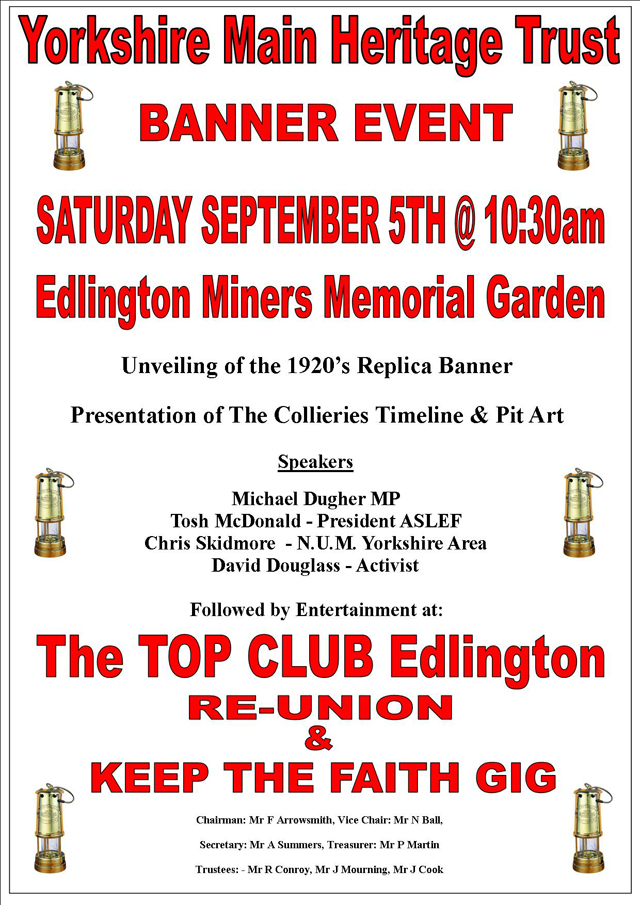